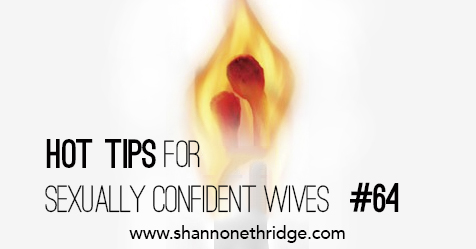 Last time we discussed how to maximize your husband’s pleasure by stimulating his top “hot spots.” A woman’s body can seem a bit more mysterious when it comes to her hot spots, but once these places are identified, they’re really not that difficult to find or stimulate. Her primary points of pleasure are:

*  The Clitoris – about the size of an eraser on the tip of a pencil, the clitoris is merely a collection of nerves that creates a tiny pink “bump” just inside the labia (the folds of skin on the exterior of the vaginal area). The best way to discover it is simply for a woman to explore this region with her fingers in the presence of her partner, then point out the tiny section that’s most sensitive to the touch. What purpose does the clitoris serve? Interestingly enough, it exist for absolutely NO biological reason other than to provide women great pleasure through clitoral stimulation and resulting orgasm. Most women report that because this is such a highly sensitive area, they prefer a variety of movements (back and forth, side to side, and circular motions) to stimulate this hot spot rather than merely an “elevator-button-pushing” approach.

*  The G-Spot – while still a mystery to many married couples, the G-spot really does exist! It’s not just something that a German gynecologist by the name of Ernst Gräfenberg made up. It’s an erogenous zone located approximately one to three inches inside the anterior wall of the vaginal canal (toward her belly button). When stimulated for long enough (done most effectively with the pad of the middle finger), it can result in a vaginal orgasm and expulsion of a significant amount of fluid (referred to as “female ejaculation”) so be sure to have towels or a waterproof pad handy. Unlike the clitoris, the G-spot is easier discovered by a husband’s fingers rather than her own.

*  The Perineum – just as the section between a man’s penis and anus are sexually sensitive due to the vast number of nerve endings present, the tiny section between a woman’s vaginal canal and anus is usually considered a hot spot as well.

With some intentionality and imagination, both the G-spot and the clitoris can be stimulated such that a woman experiences both a G-spot orgasm and a clitoral orgasm simultaneously, sometimes referred to as a “blended orgasm” or “double orgasm.”

For more information about male anatomy, female anatomy, and especially how a woman can experience orgasm, check out chapter 8 (“Experiencing the Big ‘Oh!'”) in my book The Sexually Confident Wife (Random House, 2008)