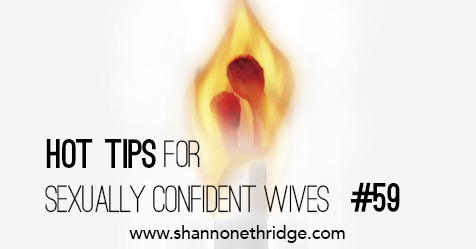 As promised in the last Hot Tip, we’re examining what it means to be a Sexually Confident Wife, which I’ve defined as:
Letting go of three things: guilt, shame, and inhibition…
And embracing three things: passion, purpose, and pleasure
So for this Hot Tip we’ll focus on letting go of SHAME…
In my years of coaching, I’ve discovered that the main reason women feel shame in the bedroom is because of their negative body image.
Because of the media images we are bombarded with, it’s easy to believe that sexual confidence is only for the young, thin, glamour girl. Bzzzt! Sorry, not so. I’ve known some very large women who are extremely sexually confident, as well as some tiny waifs who cower at the thought of undressing in front of anyone. Also, older women often describe themselves as more sexually confident than younger ones, so age is irrelevant as well. All humans can be sexually confident with the right attitude, so celebrate your sexuality regardless of the numbers on your bathroom scale, tape measure, or birth certificate.
My mental stereotype of “sexy” was shattered when I was working on a master’s degree in counseling and human relations. In the textbook for my Human Sexuality class, I discovered the most beautifully erotic picture I’ve ever laid eyes upon. This wasn’t the typical Abercrombe & Fitch-type photo of a young stud muffin with six pack abs and a beautiful blonde who went through puberty two hours earlier. Rather, an elderly couple, most likely in their seventies or eighties, were fully disrobed (naked!) and freely engaging in passionate foreplay. While a teenager may have barfed to imagine that Grandma and Grandpa might still do such a thing, I was encouraged. I thought, Wow! She’s gorgeous! And like her, I never have to “outgrow” my sexual confidence, regardless of how old, flabby, or wrinkled I become. And I was right. I don’t intend to outgrow my sexuality — ever. And I hope you don’t either.
“I feel that the older I get, the more shameless I feel.
And in a sense, more pure.”
Maria Irene Fornes
So let go of any shame you may feel over the beautiful body God gave you, and you’ll be one giant step closer to becoming the Sexually Confident Wife you deserve to be!
Wishing you shame-free living,
Shannon