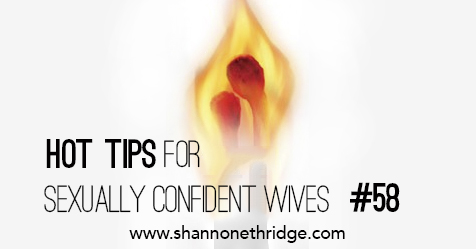 I knew when I came up with the book title “The Sexually Confident Wife” that it would raise eyebrows, pique curiosities, and spark controversial conversations. I wasn’t wrong.
Most often people ask, “What exactly does it MEAN to be a Sexually Confident Wife?”
I’ve been pondering that question a lot lately, and I’ve come up with this answer…
It means letting go of three things: guilt, shame, and inhibition…
And embracing three things: passion, purpose, and pleasure
So for the next several Hot Tips, I’d like to focus on each one of these things, starting with letting go of GUILT.
Most women who struggle with a lack of sexual self-confidence do so because of guilt over past sexual experiences, such as sexual abuse or promiscuity. The dynamics behind these two issues are very different, so let’s take a look at each one separately…
Sexual abusers are usually masters at “grooming” their victims into thinking that what’s happening is really their own idea or something they brought upon themselves, but NO underage child can be held accountable for sexual behavior – not their own, nor that of another – and that’s precisely why there are laws protecting children from sexual misconduct. So whatever guilt you may feel over sexual abuse from your childhood is simply misplaced guilt. It doesn’t belong in your court. Your abuser has left YOU holding the bag because HE doesn’t want to take responsibility. While you can’t force him to own up to what happened, you can refuse to hold the “guilt bag” yourself. Let it go.
But it feels much more justifiable to carry boatloads of guilt when sex was our choice. Many of us became sexually active of our own free will, often at very young ages with very inappropriate people. But before you beat yourself up yet again over a promiscuous past, may I ask you WHY you acted out in such a way? If you’re like me (losing my virginity at the tender young age of 14 and becoming quite sexually active between the ages of 15 & 20), sex was simply the only way we knew to try and medicate our emotional pain. We were looking for love, but settling for sex out of ignorance that there was anything better within our grasp. This doesn’t make us bad people. It makes us human. Humans who live in a fallen world and sometimes use each other in ways that we simply can’t understand until years later.

If this is the kind of guilt you carry around, will you please join me in ripping the Scarlet Letter off your sweater? Can you give yourself the same grace, mercy, and forgiveness that Christ has already extended to you from the cross that He died on? The blood He shed really IS sufficient to cleanse us of every sin we’ve ever committed, and every sin we could ever commit — even the sexual ones! And it’s a done deal. We don’t have to wait for some sort of special miracle to set us free. We are ALREADY FREE! The Bible declares it so:

* “It is for FREEDOM that Christ has already set us FREE!” (Galatians 5:1)
*”There is NO condemnation for those who are in Christ Jesus!” (Romans 8:1)
* “If anyone is in Christ, the new creation has come: The old has gone, the new is here!” (2 Corinthians 5:17)
When I was speaking at Grace College, one of the young women in the audience asked, “How can you be so full of JOY and peace and confidence after all of the sexual stuff you’ve lived through?”
My answer?
“I do not have to grieve, for the joy of the Lord is my strength!” (Nehemiah 8:10)
The joy of the Lord can be your strength as well, as you LET GO of ALL GUILT so that you can grab hold of (a) God’s truth about who you are in Christ, and (b) that husband of yours so you can ENJOY a healthy sexual relationship in marriage just as God intended from the very beginning!
Wishing you guilt-free living,
Shannon