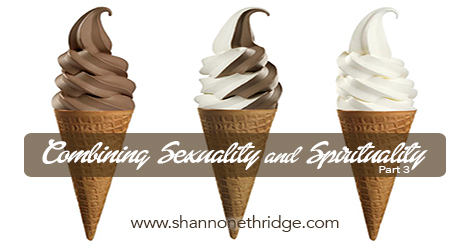 As I began brainstorming to write The Sexually Confident Wife, I made long lists of the numerous obstacles and hurdles that hold women back in the bedroom.  Some were mental obstacles, some were physical obstacles, and some were emotional obstacles.  But our sexuality is comprised of four unique components – the physical, mental, emotional, and spiritual – and with the spiritual component being the deepest one of all, I knew there was no way I could write a book about becoming a sexually confident wife without tackling some of those deep-seated spiritual obstacles that can so easily take the wind right out of a woman’s sexual sails.  So I began questioning, “Is there any major religion in which sex between a husband and a wife is forbidden, or even discouraged?”
After lots of research, I want to declare with confidence, “No!  There isn’t!”  Buddhists celebrate married sex.  Christians celebrate married sex.  Jews celebrate married sex.  Muslims celebrate married sex.  If any religion openly discouraged sex within marriage, the entire population would have died off within a generation or two!  So why shouldn’t we swirl spirituality and sexuality together and enjoy both?
I believe best-selling author (and husband) Philip Yancey would agree.  In Designer Sex, he writes:
“In one sense, we are never more Godlike than in the act of sex.  We make ourselves vulnerable.  We risk.  We give and receive in a simultaneous act.  We feel a primordial delight, entering into the other in communion.  Quite literally we make one flesh out of two different persons, experiencing for a brief time a unity like no other.  Two independent beings open their inmost selves and experience not a loss but a gain…”1
In other words, spirituality and sexuality swirled together gives us even greater insight into both pleasures.  Not only can God teach us how to have a healthier sexual relationship in marriage, but our sex life can also teach us how to have a healthier relationship with God.
For those of us who grew up in religious homes, all of the “good girls don’t have sex” messages were intended to derail us not from sex, but from sexual immorality (or sex outside of marriage), which most religions do oppose.  However, sex inside of marriage is an entirely different matter.  And not only do all major religions endorse healthy sexual expression in marriage for the purpose of procreation, but also for the purpose of mutual pleasure, intimate companionship, and marital unity.
REFERENCE
[1] Philip Yancey, Designer Sex (Downer’s Grove, IL:  Intervarsity Press, 2003) 24.
Miss Part of The Series?
Part 1

Excerpted from The Sexually Confident Wife: Connecting with Your Husband Mind*Body*Heart*Spirit by Shannon Ethridge. Copyright 2008.  All Rights Reserved. Published by Random House Inc, New York, NY. Used by Permission. Not to be copied without Publisher’s prior written approval.
Cart Item Removed. Undo
Checkout - $0.00