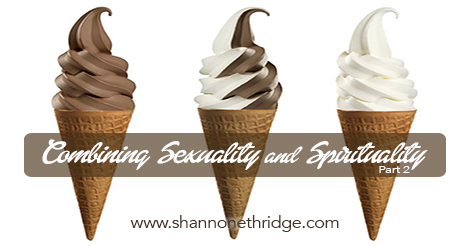 I recently decided to conduct a simple, random survey of my own about how spirituality might affect a person’s view of sexuality, and vice versa.  I approached several local college students (some married and some single) and asked each one, “Do you believe there is a God?”  If they answered positively, I followed up with the question, “How do you think God feels about sex?”  The results may (or may not) surprise you:

* “Uhhh… He doesn’t like it?”
* “Well, He doesn’t do it, that’s for sure!”
* “He abhors sex because it’s a sin!”
* “He tells us we shouldn’t do it!”
With an entirely different group of students, I approached my line of questioning in the opposite order.  “How do you feel about sex?” I asked, then followed with the question, “Do you believe there is a God?”  In answer to the first question, I’d usually get responses such as, “I love sex!” or “Sex is awesome!”  But when I gently sprang the second question on them about God’s existence, it was as if they’d been confronted by a 60 Minutes camera crew.  Some ducked their head, lowered their eyes, or lifted their shoulders as if they were trying to make their head disappear like a turtle in a shell.  They obviously felt like a child who’d just been caught stealing a cookie out of the cookie jar before dinnertime.
Granted, my personal poll is a far cry from the most scientific study in the world, but it confirmed my suspicion:  When we look at sexuality through the lens of spirituality, many view sex in a negative light.  If we look at spirituality through the lens of sexuality, many view God in a negative light.  Why is that?
Some of us were raised in religious homes where spiritual disciplines such as prayer, personal study, and worship attendance were practiced, but nothing was ever taught about sexuality.  A “don’t ask, don’t tell” rule silently loomed large over many family living rooms.  We never learned to view sexuality through the lens of spirituality at all.  We assumed sex to be something altogether inappropriate, or else we’d be talking about it in our homes, in our Sunday school classes, and in our churches, temples, or synagogues.
What happens to a woman when she grows up with the mentality that sex is bad and God doesn’t approve of it?  She feels as if she can’t have both.  She must choose.  God, or sex.  Vanilla, or chocolate.  But not both.  You can never have both.  Married women sometimes falsely assume that if they freely engage in a sexual relationship with their husbands, they’ll be “bad girls.”  After all, the one thing most religious homes did instill in their daughters is that “good girls don’t.”
But I’ve got great, life-transforming, earth-shaking, marriage-altering news for you, girlfriend.  You can have both.  You can enjoy spirituality and sexuality all swirled together — with whip cream, rainbow sprinkles, and a cherry on top!
…continued
Miss Part of The Series?
Part 1