What If I Think I Married the Wrong Person? Part 2 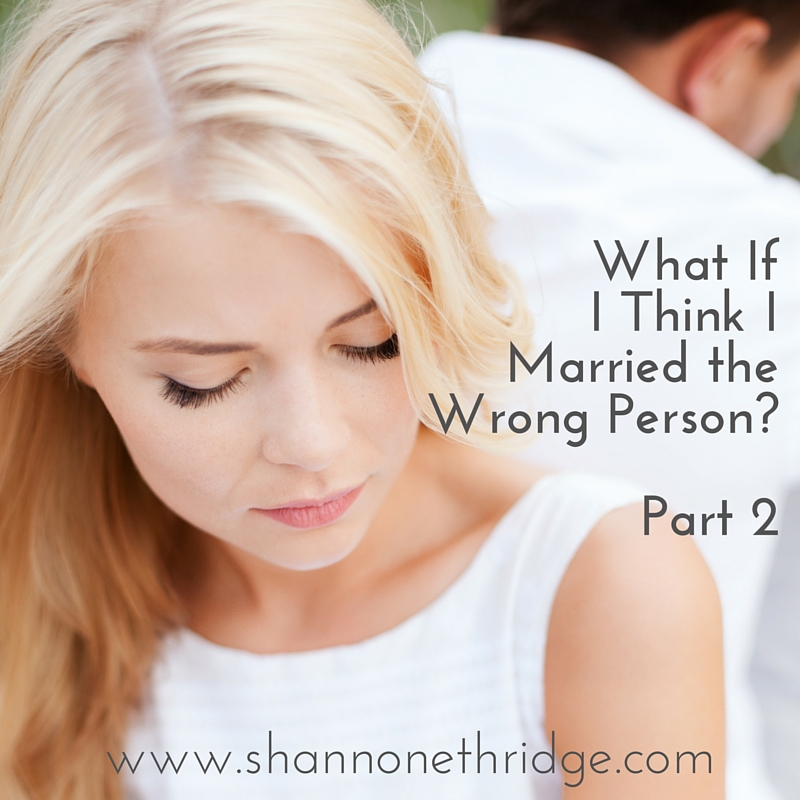 Walter Bradford Cannon theorized that human nature’s response to tension or stress is to “fight, freeze, or flee,” also known as the “fight or flight” response.(i) Rather than running away or remaining stuck in a relational rut, I urge you to reconcile the issues troubling your marriage.  Seek the help of a marital coach or counselor if necessary.  Sure, there’s usually some expense involved, but most couples will tell you (including me and Greg) that it’s been the best money they’ve ever spent.  In fact, if you think counseling is expensive, just wait until you see the price tag of divorce!  Whew!  Talk about an ounce of prevention being worth more than a pound of cure!

Earlier I posed a test question: “Your heart may be telling you to jump ship, but what is the Lord telling you to do?” Now I’d like to end this section with a few more questions. Although some divorces are justifiable (such as in the case of unrepentant adultery or abuse), I think a greater percentage of divorcing couples simply run out of energy fighting for the relationship.  They reach the end of their ropes.  They decide to cash in their chips, or gather up their toys and go home — alone.  They’d rather gamble on a more successful second attempt at marriage (or third, or fourth) than to ride out the storm until dawn bursts on the horizon.  They just want to trade their current spouses in on a new-and-improved version and get on with a “happier” life.

But let me ask you this:

*What if you knew 100 percent that there would be no “next person in line”?

*What if this divorce really is the final chapter in your intimate relational experiences?

*If you were to take the Bible seriously about not having sex outside of marriage, and you were positive that this is where your sex life ends and your life of celibacy and singleness begins, would you still want to hit the eject button on this relationship?

*Would you be willing to muster just a few more ounces of energy each day to iron the wrinkles out of your relationship?  To make it work, both for your benefit, the benefit of your spouse, and to the glory of God?

*Would you like to grow up (mature) and grow old with your mate rather than spend your remaining years in loneliness and isolation?

Take some time to meditate on those questions.  Invite the Lord to “search your heart” as He promises He can.  Open yourself wide to the possibilities.  Imagine that marital bliss could be waiting just around the next counseling corner!

As I was writing this in the Dallas/Fort Worth International Airport, I couldn’t help but overhear a middle-aged single woman one row over declaring that so many of her married friends were always bemoaning how miserable they are with their current husbands. Eager to find a man with whom she can share her own life, she often responds (half in jest, half serious), “If he’s so horrible, honey, send him my way!  I’ll take him!”  None of her friends had taken her up on the offer.  But her point was well made.  Many single people would give their right arm for the marital struggles that we have, because in their minds, even a remote chance at working through the challenging times and cultivating a rewarding marriage is better than no marriage at all.

So before you come to the final conclusion that Mr. or Mrs. Right is actually Mr. or Mrs. Wrong, consider what kind of long-term marital health benefits can result from some short-term marital strength conditioning.

Miss part of the series?

Excerpted from  The Passion Principles: Celebrating Sexual Freedom in Marriage   by Shannon Ethridge. Copyright 2014. All Rights Reserved. Published by W Publishing Group, and imprint of Thomas Nelson, Nashville, TN. Used by Permission. Not to be copied without Publisher’s prior written approval.
Cart
Checkout - $0.00