The Faces Behind Our Fantasies – Part 2 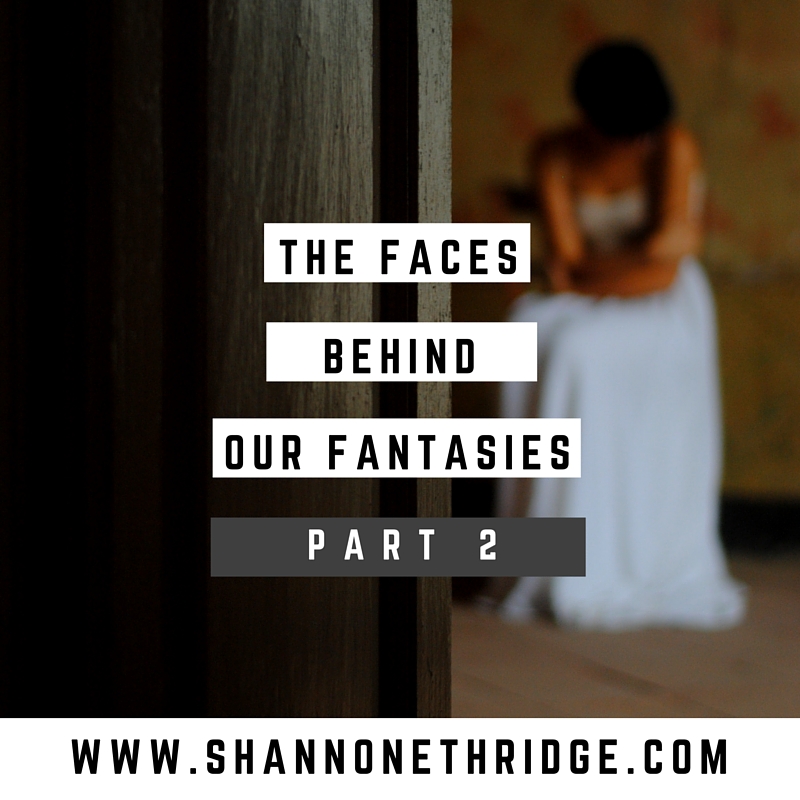 I was once thrown for a loop by my own scary thoughts as I began involuntarily fantasizing about a particular man who lived nearby. I’ll call him Zach. This man would frequently knock on the door and ask to hunt wild game on our land. But before heading to the woods with his rifle, he’d bend over backwards to engage me in lengthy conversations.

I confess, I initially soaked up the attention like a dry sponge. It felt good to have someone wanting to talk to me. It eased some of my loneliness. But it also stole too many of my brain cells and began gnawing away at my soft conscience.

Rocking in the porch swing with my husband one evening, I tearfully confessed that I’d been having emotionally charged thoughts about Zach, and asked for his accountability never to act on them.

Greg responded, “Shannon, you’re the one studying counseling and Imago therapy, which teaches that certain people fit a ‘mental mold’ based on your childhood relationships. Don’t you get it? Zach fits your mental mold. He looks just like your brother, and he acts just like your dad. This isn’t about Zach at all. It’s about you and your relationships with these important men in your life. Fix those, and you’ll fix the fantasy issue.”

I was stunned at how Greg had hit the nail on the head. Zach was merely my projection screen. I didn’t need to fear the screen (although he may have been projecting a few of his own mental movies onto my screen as well, so caution wasn’t a bad idea). I needed to pay attention to the movie I was projecting onto him.

After prayerful consideration, I realized the plot of my movie. Attention and conversation was something I’d always longed for more of from my dad and brother as I was growing up. But letting Zach try to fill that hole instead of going to the source was not only a dangerous proposition, it would have ultimately been a fruitless endeavor. It most likely would have led to some sort of emotional or sexual affair, which would have made me feel horrible about myself and driven an even bigger wedge between me and the men in my life — not just my dad and brother but also my husband. No, I hadn’t lost my keys to fulfillment under Zach’s streetlight. I’d lost those in my family of origin, and that was the only logical place to search.

So instead of letting myself get caught up in conversations with Zach, I consistently kept things short, sweet, and to the point, then would walk back into the house, leaving him standing there in the yard with hunting rifle in hand, if necessary. I also began inviting my extended family over for social gatherings more often so that we could begin making more memories together and building stronger relationships.

Miss Part of the Series? Catch Up Below!