How Is Fantasy A Friend- Part 3 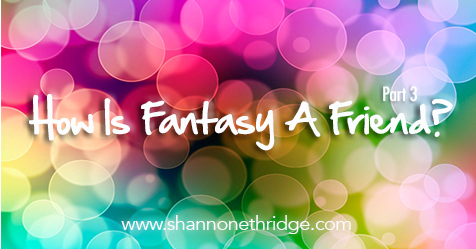 Fantasy can warn us about a possible future event.

Janie set up a coaching session thinking she’d crossed a horrible line. She was distracted almost daily by thoughts that a particularly tall, dark, and handsome stranger may board the train she rode home on. She’d seen him a handful of times but had never interacted with him at all. When I asked what line she had crossed, she admitted to having fantasies that this man might engage her in conversation and that their “accidental tourist” relationship would blossom into a sexual affair. “Is that what you want?” I inquired; she responded with shock and horror. “So if it’s
not what you want, could it be that the purpose of the fantasy is simply to warn you that this possibility exists, and to encourage you to rehearse an appropriate response?” A few weeks later, this stranger’s spotlight was indeed aimed in Janie’s direction. However, by delivering the exact response she’d been rehearsing, Janie was able to nip a potentially inappropriate relationship in the bud.