How Is Fantasy A Friend- Part 2 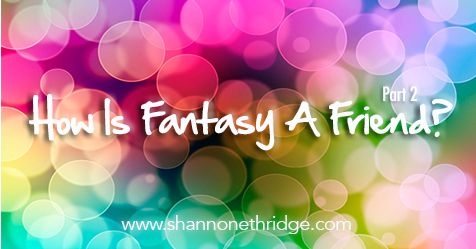 Fantasy can motivate us toward an established goal.
Amy just lost sixty pounds and feels better (and sexier) than she has in decades. When I asked her how she did it, I expected she’d tell me about an intense workout routine or a special diet she followed. But to my surprise, she replied, “I fantasized my way to this weight loss goal!  I just kept imagining at every meal what I’d love to look like by my fiftieth birthday, and I naturally ate less!”
Fantasy helps us prepare for a life transition.

Cassie came to me incredibly concerned about whether she should ever get married because the idea of sex was so scary and repulsive to her. In her late twenties, she still experienced such sexual anxiety that she asked, “If I do get married, can I ask him to cut ‘those things’ off?” I inquired what “things” she was referring to and learned that she grew physically ill over the thought of a man’s testicles “bumping up against her” during intercourse. I assured her that no man

would ever be willing to do that — not even for his wife — and that when she fell in love, she’d never dream of asking that wonderful man to castrate himself!  Indeed, Cassie eventually fell in love and got engaged, but she was still very nervous about the honeymoon (and every night thereafter). So she began preparing herself mentally through the use of fantasy. She envisioned repeatedly that she would enjoy her husband’s body, and vice-versa, in very holy and healthy ways, and that there would be absolutely no feelings of anxiety or disgust with any particular body part. After the wedding, Cassie proudly proclaimed, “Our honeymoon rocked! Nothing really freaked me out at all, thanks to the mental exercises you recommended!”