Will There Be Sex In Heaven?- Part 2 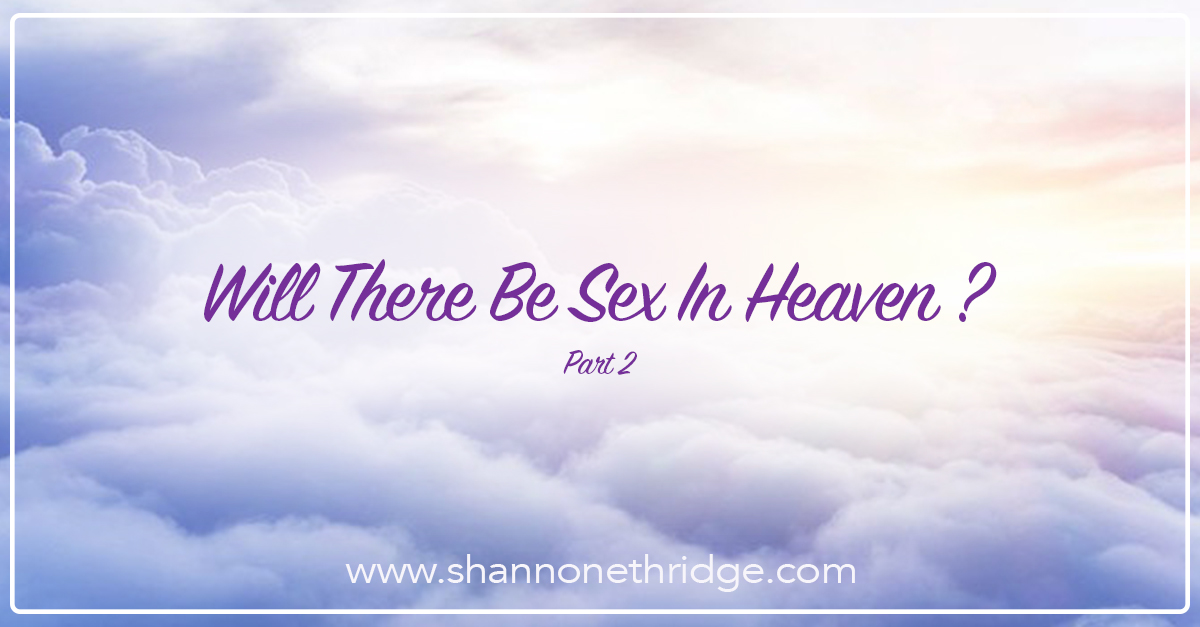 In addition to our sexuality remaining intact in heaven, there’s God’s sexuality to consider as well.  Yes, God is a sexual being, the most sexual of all beings, which I know sounds shocking to those of us who see sexuality as being strictly physical, but it’s not.  It’s both physical and spiritual.  Although we’ve historically considered God a “male” being, God actually transcends gender.  He made both male and female “in his own image” (Genesis 1:27), therefore God is both masculine and feminine in nature (a concept I explore more fully in my book The Fantasy Fallacy: Exposing the Deeper Meaning Behind Sexual Thoughts in a section called “Behind the Curtain: Searching for the Softer Side of God”6).  And I believe wholeheartedly that both God’s “sexual” nature, as well as our own sexual nature, will be fully present, fully understood, and fully celebrated in heaven.  It will be unadulterated, untainted, uninhibited, and we’ll enjoy the holiness, the purity, the perfection of all that God intended when He created us both “in His image” and “sexual” at the same time.
With that being established, let me provide a more direct answer by clarifying the question.  What we really want to know is, “Will there be physical intercourse in heaven?”   Since there will be no marriage and no further need for procreation, it’s doubtful.  But this shouldn’t be bubble-bursting news because there’s so much more to the story.  In the words of Dr. Peter Kreeft,
I think there will probably be millions of more adequate ways to express love than the clumsy ecstasy of fitting two bodies together like pieces of a jigsaw puzzle.  Even the most satisfying earthly intercourse between spouses cannot perfectly express all their love.  If the possibility of intercourse in Heaven is not actualized, it is only for the same reason earthly lovers do not eat candy during intercourse:  there is something much better to do.1
In other words, the pleasure we experience through our God-given sexuality will perhaps be different in Heaven, but will most certainly be magnified exponentially.  However, God will not remove our sexual nature.  He will redeem it.

…So rather than mourn the absence of physical sex in Heaven, let us greatly anticipate the bigger sexual picture . . .

Sex on earth is like a lovely view from a cottage window. Sex in heaven will be the breathtaking view from Mount Kilimanjaro.

Sex on earth? A $2 box of Queen Ann chocolate-covered cherries. Sex in heaven? A bar of Amedei Porcelana (Italian chocolate, $90 per pound).
Sex on earth?  A stick-figure drawing on a refrigerator door. Sex in heaven?  Michelangelo’s panoramas adorning the Sistine Chapel.
Sex on earth?  An afternoon at the local playground. Sex in heaven?  Owning Disney World.
Think of the greatest sexual pleasures imaginable-on steroids, factored exponentially to mind-boggling mathematical degrees-and we still are grasping at straws in comparison to the profound pleasures that await us in our Heavenly home.
Dearest Heavenly Father,
In response to the pleasures that you’ve created for us to fully enjoy
this side of heaven, and for all of those pleasures that you have awaiting us
on the other side, we simply say . . . WOW!
REFERENCE:
1) Peter Kreeft, Everything You Ever Wanted to Know about Heaven-But Never Dreamed of Asking (San Francisco: Ignatius Press, 1990). See www.peterkreeft.com/topics/sex-in-heaven.htm for an excerpt, “Is There Sex in Heaven?”
Miss Part of the Series?
Part 1