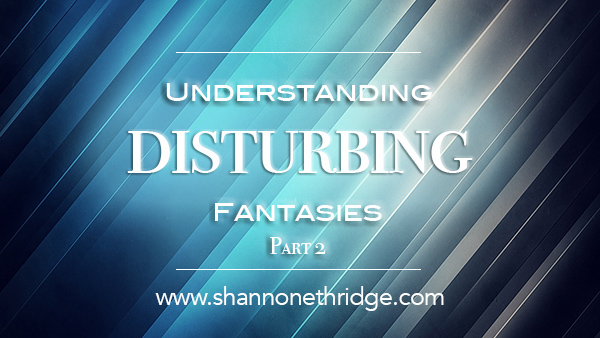 For our first coaching session, I met Mandy at a Starbucks in Dallas. After about an hour, she happened to notice a man sitting in the corner, staring straight at her while eating a banana. The conversation came to a pause, and Mandy excused herself to the restroom and was gone for quite some time. I knocked to see if she was okay. She opened the door but was standing at the sink, looking deathly pale, and holding her stomach as if she needed to vomit.  After several minutes, she regained her composure enough to return to our table. I asked if she wanted to talk about what had just occurred, and she complied, saying, “Any time I see someone eating a banana, it gives me flashbacks to when I was ten or so, when my grandfather forced me to perform oral sex on him.” Mandy went on to explain that oral sex was something that she could receive but not perform for her husband because of all the negative emotions it triggered.

“It makes me want to gag,” she continued. But if I told you what goes through my head as I’m receiving oral sex, you would gag!” I challenged her to try me, but only if she was ready to share that information. She knew I was doing research for this book, so she was eager to see if I could help her make sense of it all.
“I’ve always been angry at my grandfather for doing what he did, but that was a one-time thing. I’ve been even angrier at my father for what he did over and over.”

“Did he abuse you sexually as well?” I asked.

“No, quite the opposite,” she replied with tears weighing heavy against her lower eyelids. “He ignored me my whole life. He was a single dad, and he traveled on business, so that’swhy I stayed with my grandparents a lot. I longed for him to want to spend time with me, to find me interesting, to think I was beautiful. So the way I most often experience orgasm is to envision my own father showing a sexual interest in me. I’ve often thought, Why couldn’t it have been Dad instead of Granddad who wanted me?’ Crinkling her nose with disgust, she asked, “Isn’t that absolutely horrible?”

A few years ago, out of ignorance, I may have concurred and fueled her fears that this was a sick and twisted fantasy. But in light of all I’ve learned, I could see how the fantasy would make perfect sense in her mind; it was merely her brain’s way of trying to heal itself from feelings of rejection and emotional neglect from the most important person in her life. The fact that her dad had no time or attention to give her was horrible. The fact that her grandfather sexually abused her was horrible. But she was not a horrible person for trying to heal those sexual and emotional scars the only way her brain knew how.