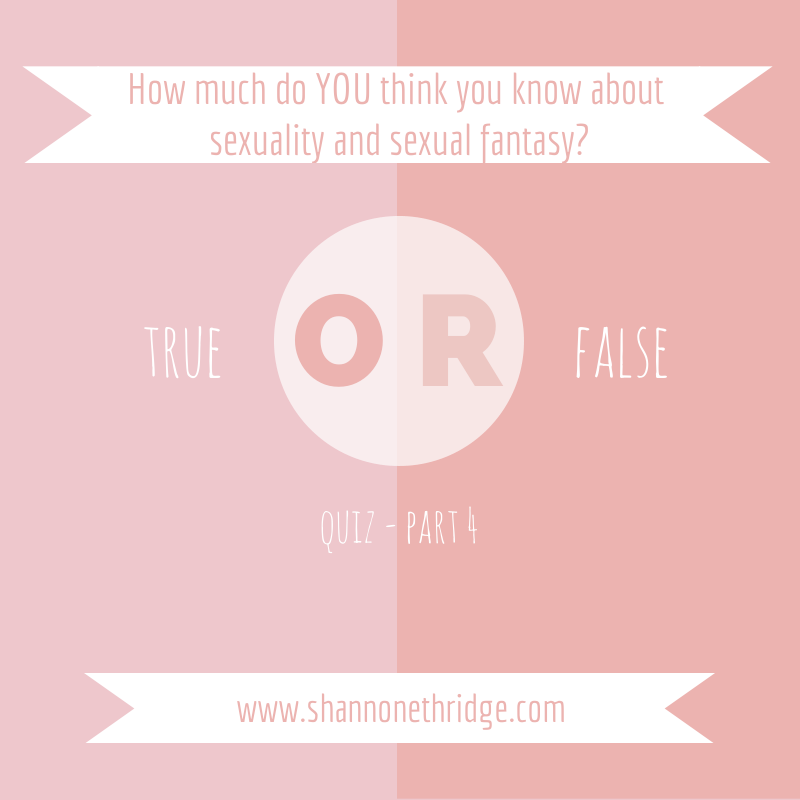 4. Sexual fantasy and lust are the same thing.  False.

Now that we’ve established a definition for sexual fantasy, let’s talk about lust.  Any time the word lust is mentioned in the Bible, it’s in reference to craving something that doesn’t belong to the person doing the lusting, such as “lusting after other gods” (Exodus 34:15), “giving up your lust for money” (Job 22:24), or Job committing “not to look lustfully at a young woman or a neighbor’s wife” (Job 31:1; 31:9).

Lust is never mentioned in the context of a marriage partner wanting to please or be pleased by their spouse.  Such desire isn’t lust at all.  As we’re told in 1 Corinthians 7:9, “It’s better to marry than to burn with lust.”  In other words, the act of marriage transforms our lustful longings (to have sex with someone we’re not yet married to) into longings that are holy, pure, and unequivocally right, because marriage is God’s ordained place for those passionate and pleasurable longings to be fully explored and enjoyed.

In his book, The Bondage Breaker, Neil T. Anderson provides even more insight as to how our sexual thoughts and desires are perfectly normal, but also how to know when they begin to cross a line.  He writes:

Sex is a God-given part of our autonomic nervous system.  Normal sexual functioning is a regular, rhythmic part of life.  But when Jesus said, “Everyone who looks on a woman to lust for her has committed adultery with her already in his heart” (Matthew 5:28) he was describing something beyond the boundary of God’s design for sex.  The word for lust isepithumos.  The prefix epi means “to add to,” signifying that something is being added to a normal drive.  Jesus challenged us not to add onto the God-given sexual drive by polluting our minds with lustful thoughts.  The only way to control your sex life is to control your thought life.[i]

Unfortunately, controlling our thought life is much easier said than done, but I pray this book will help us all do just that – by helping us understand (rather than ignore) the sexual thoughts that often surface in our minds.

Another reason why I don’t think sexual fantasy and lust are necessarily the same thing is because many coaching clients tell me that their sexual fantasies often include something they don’t desire at all.  A man who fantasizes (or has a sexual thought) about being with another man often finds the thought rather repulsive, but yet it can resurface time and time again.  A woman who fantasizes (or who has an occasional sexual thought) about being raped usually doesn’t really want to be raped.  So for the purposes of discussion, not all fantasies can be classified as lustful thoughts.  Sexual fantasies are merely thoughts that may be trying to tell us something that our minds are not consciously aware of.  There’s no need to shoot the messengers.

Did you miss a part of the series? You can find them here!