Searching for a “Fountain of Youth” 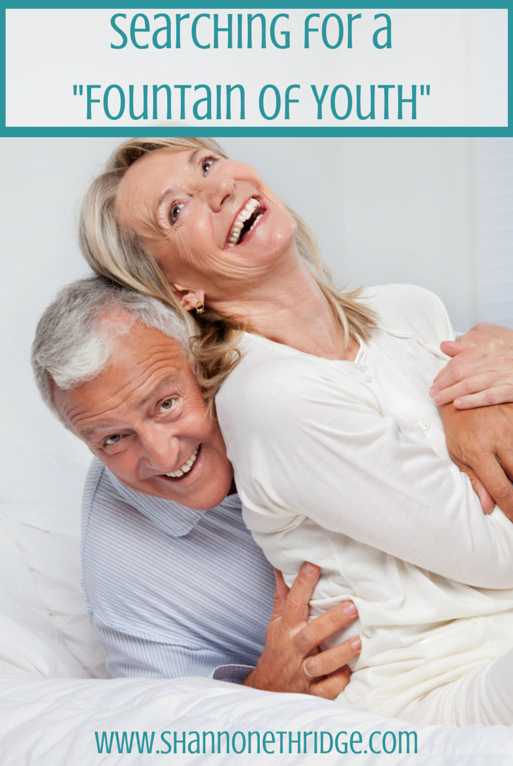 Perhaps you’ve heard the joke about the man who trades in his cold fifty-year-old wife for two hot twenty-five-year-olds. Or you’ve seen the movie The Graduate about “Mrs. Robinson,” a middle-age mom who seduces a twenty-one-year-old virgin. Searching for a younger sexual partner to hide the fact that we’re growing older isn’t just the focus of jokes and movies. It’s frequently the stuff that headline news is made of as well, such as the forty-something youth pastor who wants to marry a fourteen-year-old member of his youth group, or the female teacher who is fired for having sex with one of her teenage students. Stories such as this give rise to terms such as “dirty old man,” “cougar,” and “midlife crisis.”

…Given that the fantasy of having a much younger sex partner is relatively common to both men and women, let’s consider possible meanings behind this archetypal image. The most obvious reason is that society celebrates and glamorizes the firm bodies and energetic souls of young people far more than the passion, wisdom, and experience of older people. We’ve been conned by the media into believing that we “lose our appeal” as we grow older, but beauty is in the eye of the beholder. Plenty of people find aging men and women sexually attractive. There have actually been studies proving that both genders find gray hair particularly alluring.

I think the main reason Hollywood focuses their lens on “youth” is because they’re more exhibitionistic and easier to catch on film. Teens and twentysomethings don’t know any better than to lift their T-shirts for a Girls Gone Wild camera crew. They are still searching for their own sense of self and make easier targets for sexual exploitation.

An even deeper layer that we need to acknowledge is that as we age, our spouse ages too, and the question often looms large in at least one partner’s mind, Is this the beginning of the end of our (my) sex life? Because sex appeal and arousal is often a mental measuring stick for vitality and quality of life, such a notion can be very scary. The thought of tapering off sexually can feel like slipping one foot into the grave and greasing the bottom of the other shoe. After all, we grew up thinking our own parents never had sex (they seemed too old for that!), and none of us ever envisioned our grandparents still having sex at their age (although many of us were quite wrong).

This fear of growing old and losing our mojo is what often drives middle-age men to fantasize about their young receptionists, or to mentally compare their wives to much younger women, thinking of all the ways their bodies simply don’t measure up any longer. This is a very unfair comparison. Age happens to both of us (in equal proportion) as calendar pages turn. Her facial wrinkles, saggy breasts, and cellulite ripples don’t have to be any less appealing to him than his receding hairline, belly paunch, and ever-growing nose and ear hair are to her. It’s simply not about looking like Barbie and Ken dolls all our lives. It’s all about loving each other and remaining as sexual as possible as we grow old together.