Putting Ghosts In Their Place 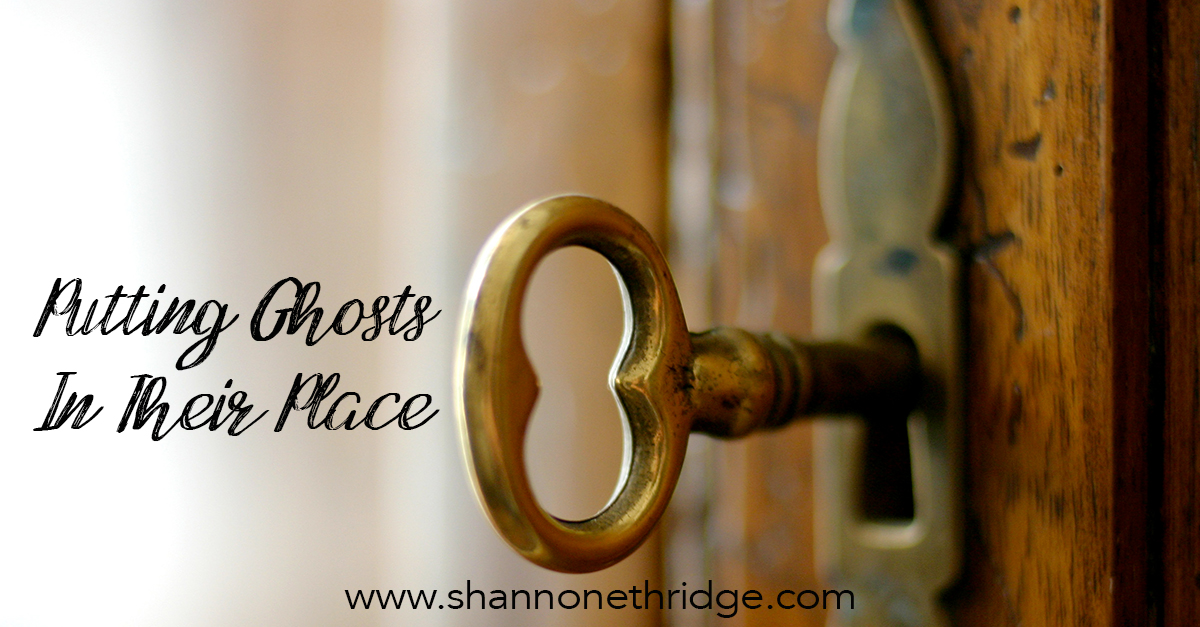 The fall of 1987 was an exciting time.  After graduating from high school a year earlier, I was finally going off to college.  During my first week in school, I rented an apartment, landed a good job, and began juggling all of the responsibilities of adulthood.   But inside, I was still a little girl looking for a father figure to make me feel loved, and one of my professors, Ray, fit the mold perfectly.

The first time our eyes met, it was obvious that Ray was taken aback.  He visually locked on with a ga-ga look on his face as I walked across the classroom, and he quickly engaged me in conversation in the hallway after class.  He soon began visiting my apartment after school and calling often.  At 39 years old, he was 20 years older than me.  Strike one.  He was not only my professor but also the dean of the college I was attending.  Strike two.  And he was newly married to his third wife.  Strike three.  Yet foolishly, I didn’t throw him out of the game.  I played around in that relationship for 18 months, and I lost big-time – my heart, my dignity, and my self-esteem.  I finally came to my senses just months before I’d walk down the aisle to become his fourth wife.  Although he’d studied to become a priest years before, he showed little interest in spiritual matters.  I pestered him to attend church with me once we started living together.  He visited once, then encouraged me to just go without him.  It’s how my own mother had lived from Sunday to Sunday, sitting alone in a pew while her husband stayed home, and I didn’t want to follow in her footsteps.
My wake up call came when I asked Ray if he was willing to have more children once we got married.  He responded, “I’ve already had all the kids I want.  Besides, I don’t know what kind of mother you’d be.”  Ouch!  Although it was a valid concern at the time, his comment stung enough to send me walking out the door.  Cutting the physical tie was easy.  Cutting the soul tie proved to be far more complex.
Fast forward the tape a couple of years.  Greg and I had been married only a few months, but reality was already setting in.  The marital bliss was wearing thin.  Things weren’t so hunky-dory anymore.  Marriage was proving to be much harder than I thought.  And when I wanted to talk to someone about my fears and frustrations, guess who I naturally gravitated toward?  Call me crazy, but yep, I ran back to Ray.  (The old Proverb is true — a dog returns to its vomit, and a fool returns to his folly! )  Ray’s best response to my disillusionment?  “I could have told you that a woman like you would never be happy with a virgin.”
Greg’s sexual performance hadn’t been an issue at all.  But Ray’s comment stuck with me.  One day while Greg and I were about to make love, I pleaded, “I wish you’d approach me with more whirlwind passion!  Come on!  Sweep me off my feet!”
Greg lovingly but firmly replied, “Shannon, don’t ever compare me to someone you had no business being in a sexual relationship with in the first place.”  Yet another Ouch! moment in Shannon Ethridge’s colorful history.  The truth often hurts, even when it is spoken in love.  I had been mentally reminiscing about all of the romantic things Ray had done to make me feel special, yet failing to remember just how dysfunctional our “love” for each other had been!  I apologized to Greg and banished memories of Ray from our bedroom.
A few years later, I was having one of those dark days that every stay-at-home mom has on occasion.  My kids weren’t behaving.  The house wasn’t staying clean.  I had no idea what to make for dinner.  And not even Calgon could take me away from the depression that was setting up shop in my spirit as my children stomped on my one last intact nerve.  In my mind, I could almost hear Ray’s words all over again.  “I’m not sure what kind of mother you’d be!”  It had been years since he’d spoke those words, yet it had obviously stuck in my spirit and traveled through life with me, like a big wad of bubble gum that sticks relentlessly to the bottom of your shoe.
That’s when I woke up from that relationship a second time, recognizing that I could no longer be haunted by the ghost of Ray – not in my bedroom, or my living room, or in any other corner of my mind.  He was not an expert in my life, nor a wise counselor, nor spiritual guru.  He was not my father, nor even a good example of what a father should be.  He was not my soul mate.  He was merely a blip on my sexual screen, there to alert me of a painful lesson I needed to learn.  I’d carelessly placed my hope and trust in the hands of a man who was only using me to serve his selfish sexual agenda.  It was time to cut that thread from my life’s tapestry so that it didn’t shape any further dysfunctional patterns.  Memories of Ray became merely spiritual markers of where I once was, and how far I’d come since then.