Looking To Music & Literature For Clues 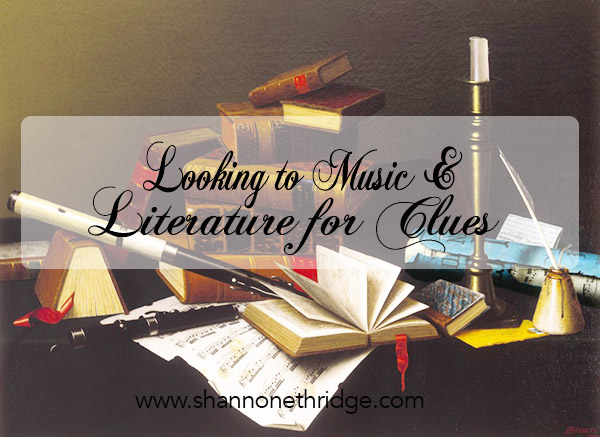 Greg and I were walking through the downtown streets of a quaint little bed and breakfast town one Saturday morning in the spring of 1998.  We’d stolen away to look at some hard questions, particularly, “Why is Shannon so tempted by yet another extramarital affair?”

We’d had some gut-wrenching conversations during the 8-hour car ride and throughout the night before.  This morning we were taking a break from the mind-numbing mental exercise of trying to figure out what was really going on, just walking hand in hand and soaking up some of the local ambiance.

We wandered into a bookstore on the downtown square and each drifted in our own directions.  Shortly, Greg approached me with a small book in his hands and asked, “Would you let me buy this for you, as a special gift from me?”  It was Robin Norwood’s Daily Meditations for Women Who Love Too Much.  As I thumbed through the cartoon-filled pages, I felt as if that book had been written just for me, just for this season of my life.  Greg obviously sensed that as well.  He said he couldn’t be mad at me for being such a loving person.  He simply wanted me to stop loving other men too much!

One of the most revealing meditations read:

For clues to your personal style [of loving too much], consider the common themes expressed in your favorite work of fiction, your favorite film, your favorite song, poem, fairy tale, etc.  Taken together they will almost certainly provide you with insight into how you go about the business of living and loving – too much.

It didn’t take much pondering to figure it out.  Favorite fiction novel?  The Scarlet Letter.  Favorite movie?  The Thorn Birds.  Favorite song?  Any song from the Phantom of the Opera musical soundtrack.  Examined together, these works revealed the lessons my soul longed to teach me.

The Scarlet Letter had been the focus of my senior research paper.  I was fascinated by the story of Hester Prynne, a married woman who (in the long-term absence of her husband) gave into her passions for her minister, Arthur Dimsdale.  When Hester becomes pregnant with Dimsdale’s child, her growing belly announces to the world that she’s committed sexual sin.  The townspeople insist she forever pin a scarlet letter “A” to her clothing as a constant symbol of her adultery.  Although her reputation is brought low, Hester keeps her head held high.  However, Dimsdale never comes clean about his part in the adulterous affair.  He clings to his sterling reputation, while Hester has hers dragged through the dirt.  He daily dons his black and white priestly garments, while Hester adorns her chest with the harsh red reminder.  Dimsdale’s guilty conscience gradually gnaws away at his soul, while Hester ultimately is liberated from the chains of public opinion.  Such a scandal stirred me to the core.

Along the same lines, The Thorn Birds was a television mini-series that I watched religiously as a teenager, then rented the entire video collection many times as an adult.  My heart ached for Meggie, a young girl who grows up in an emotionally disconnected family, loses her father and closest brother in an accident, and looks for solace in her close friendship with Father Ralph Debricasar.  As Meggie blossoms into a woman, her fascination with Father Ralph takes on new meaning, as does his fondness for her.  Meggie longs to have him in her life, not just as a priest, but as a partner.  But Father Ralph has his eye on the Vatican, hoping to climb the papal ladder.  He spurns her amorous advances, saying, “I do love you, Meggie, but I love God more!” However, fast forward several years, and in a moment of weakness on a remote tropical island, Meggie and Ralph are swept up by their passions and consummate their love for one another.  Nine months later, Meggie bears his child and keeps his paternity as secretive as their private rendezvous on that beach.  Like Arthur Dimsdale, Father Ralph hides his guilt with his priestly garments.

I first heard the soundtrack to Phantom of the Opera while riding in my boss’s car in my early twenties.  She explained the storyline about how Christine, a young opera singer, is seemingly possessed by an opera house ghost who becomes her mentor, or her “angel of music.”  Although he hides his disfigured face behind a mask, he visits her and lures her into his dark catacombs beneath the opera house, attempting to seduce her into becoming his own.  Falling under his spell, Christine feels torn between her beloved musical mentor, and Raoul, her childhood sweetheart whose love for her is much more pure and selfless than that of the phantom.  But Christine feels supernaturally drawn in the phantom’s direction, almost as if their souls are connected somehow.  Indeed, she has grown to see him as a father-figure since the death of her own father.  She feels she has no control over her own life or her own choices, for she is a princess-like pawn in the phantom’s musical game.

So what is the common thread between The Scarlet Letter, The Thorn Birds, and Phantom of the Opera?  A woman who loses herself to a man, surrendering her mind, body, or soul (or all three) in hopes of discovering that which her heart yearns for.  However, such fulfillment ultimately eludes each one of these women, and in the end she must awaken from her trance and recognize that he’s not the answer to all of her longings.  Hester Prynne deals with the emotional fallout of having given her body to a man who is willing to privately have sex with her, but is unwilling to publicly commit his life to her.  Meggie learns that she’ll always have to take a backseat to God in Father Ralph’s heart, and not even her body, heart, and soul on a silver platter will move her to the frontrunner’s position.  Christine finally gets it through her pretty head, as Raoul insists, “Whatever you believe, this man, this thing, is not your father!”  By the end of the movie, she recognizes that she hasn’t been possessed, but rather obsessed with the idea of having an angel to lead, guide, and direct her.  She declares, “Angel of music, you deceived me!  I gave you my mind blindly!”

Yes, it’s the hurdle that all women must overcome – the tendency to blindly give ourselves away in the hopes of earning a man’s everlasting love.  We allow our minds to become obsessed.  We allow our bodies to be possessed.  We carelessly tie our heartstrings to a man’s, creating soul ties that eventually bind us together long after the last “goodbye” is said.  These romantic obsessions, shattered dreams, and bittersweet memories linger, often robbing us of our sexual self-confidence when we realize that he was more of a loser than the ideal lover.  We secretly wonder, If I gave myself to Prince Charming, and he turned out to be a toad instead, what does that make me?  In all honesty, it simply makes us foolish, love-hungry women.  But the good news is that we don’t have to remain that way.  Dysfunctional relationships are not a life sentence.  Relational mistakes can equate to valuable lessons learned, and valuable lessons learned can equate to wisdom and confidence.