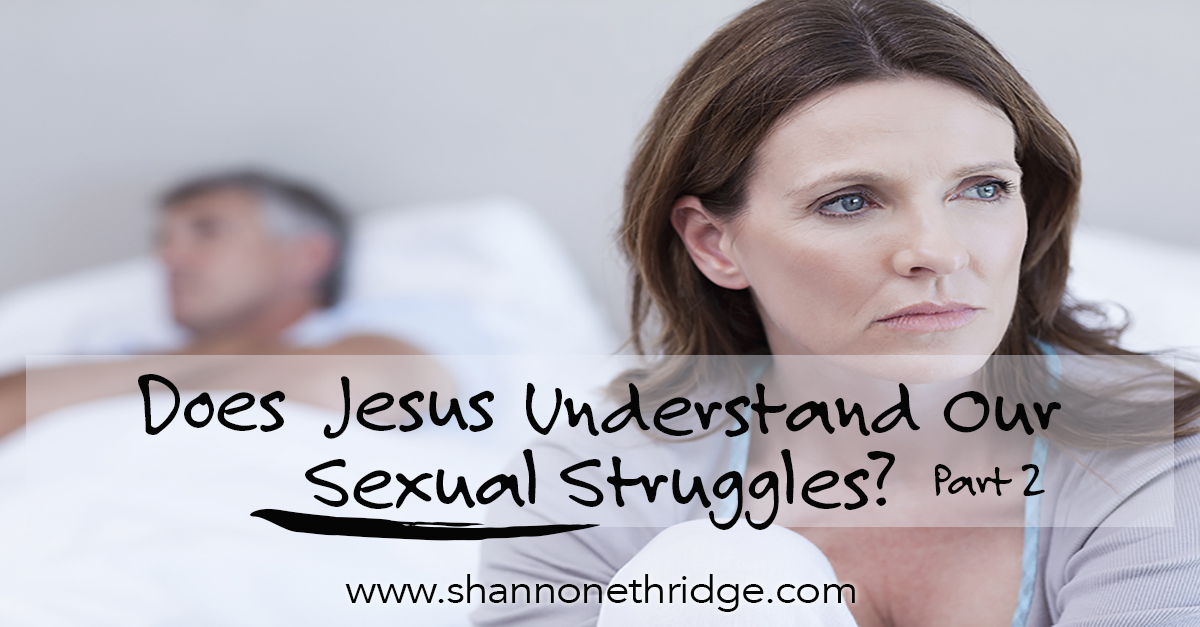 In addition to being a living, breathing example of sexual integrity, Jesus also had a few interesting things to say about sexual sin, particularly in the Sermon on the Mount, where He makes the following strong statements:

*  “You have heard the commandment that says, ‘You must not commit adultery.’ But I say, anyone who even looks at a woman with lust has already committed adultery with her in his heart.” (Matthew 5:27-28)
*  “So if your eye-even your good eye-causes you to lust, gouge it out and throw it away. It is better for you to lose one part of your body than for your whole body to be thrown into hell. And if your hand-even your stronger hand-causes you to sin, cut it off and throw it away. It is better for you to lose one part of your body than for your whole body to be thrown into hell.”  (Matthew 5:29-30)
*  “You have heard the law that says, ‘A man can divorce his wife by merely giving her a written notice of divorce.’ But I say that a man who divorces his wife, unless she has been unfaithful, causes her to commit adultery. And anyone who marries a divorced woman also commits adultery.” (Matthew 5:31-32)
These passages can sound like bitter pills to swallow.  After all, most of us would be walking around blind and castrated if we took these passages literally!  In fact, I was shocked and disheartened to learn of a woman who, as a result of her misinterpreting these passages, gouged out her own eye.  How sad that she didn’t believe God’s grace to be sufficient, or His mercies to be new to her every morning as He promises (see 2 Corinthians 12:9, Lamentations 3:22-23).
I’m not saying that Jesus wasn’t being serious in these verses; I’m simply saying that He was using extreme language to convey just how seriously He wants us to treat the sanctity of not just our bodies, but also our hearts and minds, as well as our marriage relationships.  To loosely paraphrase using the SEV (the Shannon Ethridge version), these passages might be interpreted accordingly:
*  When you notice a beautiful person, give credit to the Creator, not the creation.  Don’t go out of your way to try to make that person yours if they (or you) belong to someone else.   Show some respect, both for the other person and for yourself.  Take your mental and emotional integrity as seriously as you take your sexual integrity.
*  Never assume that until you have sex with another person, there’s no harm in looking and leering.  Those inappropriately obsessive thoughts and sexually-stirring stares will lead you exactly where you know you shouldn’t go, so guard your eyes, heart, and mind just as vigilantly as you guard your body.
*  Divorce isn’t the answer for every marital woe.  Husband and wife belong to one another forever, so take your wedding vows seriously and be faithful to each other.  Don’t just hop from one marriage relationship to another.  Instead, figure out how to make it work and make love last!

PRAYER:  Jesus, thank you for teaching us by example how to be sexual beings, without being sexually inappropriate.  Show us how to be good stewards of our sexual thoughts and desires.

Excerpted from  The Passion Principles: Celebrating Sexual Freedom in Marriage by Shannon Ethridge. Copyright 2014. All Rights Reserved. Published by W Publishing Group, and imprint of Thomas Nelson, Nashville, TN. Used by Permission. Not to be copied without Publisher’s prior written approval.