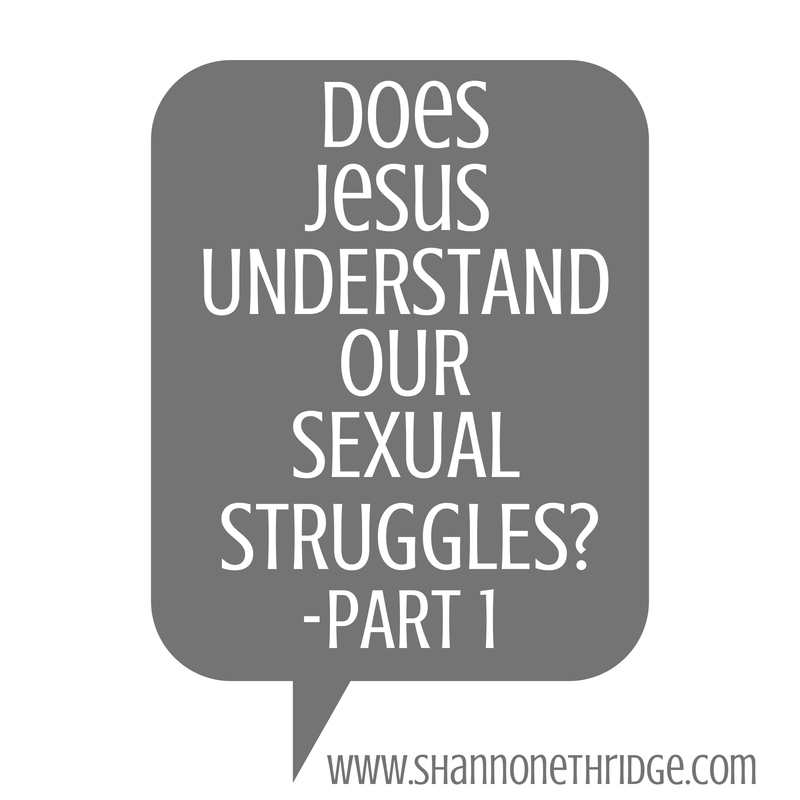 I usually give the audience several minutes to discuss this question, and then I ask  for folks to shout out their conclusions.  On occasion someone will respond, “No. Jesus wasn’t tempted sexually because He was God.”  And then I’ll see lots of heads turning from side to side, responding negatively as if they do not agree. Of course, they aren’t denying that Jesus was God.  It’s just that they also know that Jesus was both fully God and fully man.  In John 1:14 we read, “So the Word [God] became human and made his home among us.” Or, as Eugene Peterson puts it in The Message, “The Word became flesh and blood, and moved into the neighborhood.”

But more often the response I receive to the question about whether Jesus was ever tempted sexually is a wholehearted, “Yes! Jesus did have sexual thoughts and feelings!”  And many are even able to back their theory up with the following passage of Scripture:“This High Priest of ours understands our weaknesses, for he faced all of the same testings we do, yet he did not sin” (Hebrews 4:15).

Did you catch that?  He faced all of our same testings.  There is no asterisk with a disclaimer at the bottom of the page that says, “Except sexually. Jesus wasn’t that kind of guy.”  No, in fact Jesus was tempted in every wayknown to man (and woman), yet He showed us by example that we don’t have to give in to those feelings and live outside of God’s perfect will for our lives and relationships.

Something that has really stood out to me as I’ve pondered this passage is thatJesus didn’t avoid sin because He wasn’t tempted at all-He avoided sinalthough He was tempted!  This is a very important distinction to make.  There is a big difference between not sinning when you are tempted, and not sinning because you aren’t tempted at all.  For example, it doesn’t take much for me to avoid alcohol because I simply don’t like the taste.  But my husband enjoys a nice cold beer when we go to certain restaurants, so for him to exercise self-control after one beer is a lot more impressive than me exercising self-control under the same scenario. (I do, however, know the temporary intoxication of toxic relationships. Funny how those two words,intoxication and toxic, are so similar! So that’s where my self-control is occasionally tested.

Perhaps you are thinking, “What’s that got to do with Jesus?  I don’t think Jesus was tempted by that kind of stuff!”

Really? You don’t think He enjoyed the exquisite taste of that ordinary water He turned into the finest wine?

So now you may be thinking, Well, okay, it was impressive that Jesus always knew when to stop drinking.  But surely Jesus wasn’t tempted by inappropriate relationships!

Think about it.  Jesus had beautiful women following Him from town to town, spending their own money to care for His personal needs, washing His feet with their tears and drying them with their long silky hair, anointing His body with expensive perfumes, etc., etc.  I’m sure that many of these women were enamored with Jesus’ strength of character, authority, compassion, and verbal talents (talk about meeting a woman’s emotional needs!), not to mention His amazing miracles of healing and restoration.  Let’s not be naïve!  Jesus could have easily used one of these women for a little ego stroke of His own, and no one would have even noticed.  But Jesus kept His ego very much in check.  Even as the Son of God (which was far more impressive in crowds than being Elvis or the Beatles when you think about it), Jesus wasn’t interested in what He could get for Himself while on this earth, but rather, what He could give to us. And one of the greatest things He gave to us, besides eternal salvation through the personal sacrifice He made on the cross, was an amazing example of what it looks like to be “tempted in every way, yet without sin.”

Excerpted from
The Passion Principles: Celebrating Sexual Freedom in Marriage
by Shannon Ethridge. Copyright 2013.  All Rights Reserved. Published by W Publishing Group, and imprint of Thomas Nelson, Nashville, TN. Used by Permission. Not to be copied without Publisher’s prior written approval.
Cart
Checkout - $0.00