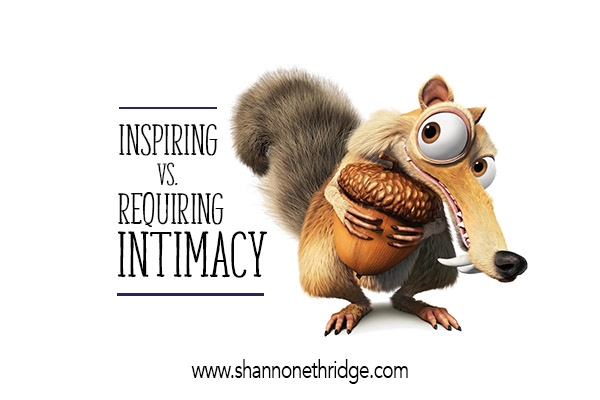 When my son was a toddler, he would often bring his toys and sit beside me to play. Regardless of what I was doing, he wanted to be near me. I found this very precious. But I also recall the many times that he would reach up to my cheek with his little hand and push my face toward something and say, “Wook, Mommy, wook!” I found this very annoying. Had he merely asked me to look, I would have been delighted. But because he felt the need to force me to look, the last thing I wanted to do was respond to his demand.

Fortunately, my son has outgrown this habit. Unfortunately, many wives have not. We still want our husbands to look inside of us, to pay attention to us, and to give us the emotional intimacy we crave, and we often try to force them to do so. When we attempt to require intimacy in this way, the last thing they want to do is respond to our demands (or manipulations, or however we choose to pursue it). However, there is a better way.

Imagine wanting to give a squirrel a nut. How would you do it? Would you chase the squirrel around the yard, grab him by his scrawny neck, and force the nut into his chubby cheeks? Of course not. You cannot require a squirrel to take a nut from you. However, you can inspire the squirrel to do this by simply placing a nut in your open palm, lying down beneath a tree, and falling asleep. When it’s the squirrel’s idea to take the nut, he’ll do it.

Communicating intimately with our husbands is very similar to giving a squirrel a nut. Requiring it is futile. Intimacy can, however, be inspired. I used to go to bed expecting that my husband would talk with me for a while, not just about superficial stuff, but really engage in deep conversation. Even though I had heard psychologists explain that men are capable of speaking only so many words each day and that they are almost all used up by the time he gets home from work, I thought I could drag it out of him. Needless to say, I usually went to sleep disappointed. Sometimes I went to sleep devastated, as I was trying to carry on a meaningful conversation and the only response I ultimately got once I stopped talking was “Zzzzzzzzzz.”

Then I heard about this squirrel-and-nut theory and decided I may as well test it. I would go to bed with my husband at a decent hour, but rather than expecting to talk, I would simply say goodnight and allow him to drift off to sleep. After a few nights of this, Greg asked, “Are you upset with me about something?”

I smiled and said, “I’m not trying to give you the silent treatment, honey. I just know you are tired at night after a long day at work, and I want you to get plenty of rest.”

Later that same night, we were getting in bed when Greg began asking me about my day and what I planned to do tomorrow. I responded, but didn’t elaborate a great deal. Surprisingly, he kept asking more questions. Then he began telling me about some of the things that he’d had on his mind lately, asking me questions about what I think. We wound up talking for over an hour, and then moved closer to each other to lie in each other’s arms. We decided to pray together, and by the time Greg finished praying, my desire to give him my body was positively overwhelming! Did he mind staying up a few more minutes to receive the gift I longed to give him? Absolutely not!

We stumbled onto something that night many years ago that we’ve never forgotten: True sexual fulfillment comes from not just a physical connection, but from an intimate mental, emotional, and spiritual connection as well. Although some nights we both drift off without much being said simply because we are both so tired, we have many nights when these intimate, brain-picking, heart-rendering, soul-searching conversations take place spontaneously. Sex doesn’t always follow, but when it does, it’s an incredibly fulfilling experience because the passion between us has been inspired, not required.