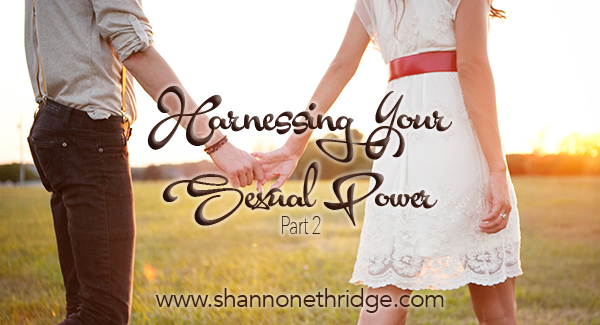 3.  View sex as much more than just a reward for good behavior.

A woman is naturally more prone to initiate physical affection when she is pleased with her husbands’ performance.  When he goes above and beyond to help you in the house or make you feel special, or gets a promotion at work, or really goes the extra mile in spending quality time with the kids, it’s easy to want to toss him a cookie.

However, women have to be careful not to reduce sex to a doggie treat that’s handed out only when he does the right tricks or obeys our commands.  He’ll catch on to that quickly, and while he loves the treats, he’ll come to resent the hoops he’s expected to jump through to get them.  The sexually confident wife doesn’t keep her husband on a short sexual leash with the expectation that he’ll heed her every instruction.  She initiates sex with him simply because she loves him and wants him to know it, even when his performance isn’t necessarily worthy of special attention.  Besides, awarding sex only when he pays the right price causes a wife to more closely resemble a prostitute than a life partner.  Remember, your sexual relationship isn’t about what you accomplish for each other.  It’s about who you are and what you mean to each other.
4.  Avoid the old “bait and switch” trick.

“I don’t understand why my wife finds ________ such a repulsive act when she seemed more than happy to do that when we were dating.  I feel like she pulled the old ‘bait and switch’ trick on me!”  Sadly, my husband and I have heard this sentiment expressed on numerous occasions.  Women often wield their sexual power by doing anything their boyfriend desires to get them hooked.  But after the wedding band goes on her finger, she re-writes the sexual rulebook.  By making certain acts against the rules, she is basically saying to her husband, “That’s gross.  And you’re gross for wanting to do that.  I must have married a pervert.”  And what does this do to his sexual confidence?  Let’s just say that if his feelings were visible and audible, we’d see him wince and hear him yell, “Ouch!”

One of the worst uses of our sexual power is to use it to insult or inflict harm on our husbands.  If there are sexual activities you’ve engaged in together previously that you no longer feel comfortable with, verbalize why you feel the way you do and make sure he does not feel judged for enjoying that act.  Talk it through with the goal of reaching a compromise that you can both feel good about.  Chapter 11 [of The Sexually Confident Wife] will help you establish a set of sexual boundaries that feel comfortable for you, and will help you respectfully communicate those as well.
5. Don’t keep score in the bedroom.

“Sex is always all about you!  It’s never about me and what I want!”  While many women may have the right to feel that way, harshly verbalizing such a sentiment isn’t the greatest of aphrodisiacs.  A friend once informed her husband that they’d only be having sex when they had the time and energy for them both to reach orgasm.  What did this do to their sex life?  Quite frankly, it killed it.  While they used to have sex at least once each week, it became more like once every six weeks or so, then she admitted to me that it had been six months!  When I asked what she was getting out of this little game, she replied, “I’m keeping the score even.”

Consider two women – one who gives far more than she receives sexually (but doesn’t keep score), and the other who plays this “tit for tat” game (no pun intended).  Which one of them is really the winner in her marriage?  The one who demands every bit as much attention as she gives, or the one who gives freely?  The sexually insecure wife keeps score and demands equality.  But the sexually confident wife knows that it’s more blessed to give than to receive, for that is how we inspire (rather than require) intimacy in a relationship.
Miss Part of the Series?
Part 1