What Was God Thinking When He Created Sex- Part 2 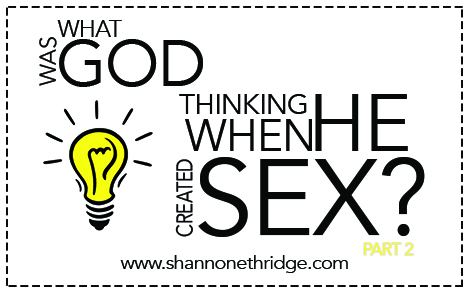 It’s easy to tell when a man or a woman has been indoctrinated into a “sex-negative” way of thinking simply by the words that come out of their mouths.  Just a few examples:

*  Tina, age 23, who just six weeks before her wedding day posed the question, “Does a marriage really have to involve sex?  I mean, I know I’ll need to have sex to conceive children, but other than that, I’m really hoping my husband will be satisfied with just living happily together, because the idea of him putting ‘that thing’ inside of me makes me nauseous!” (Obviously no one has told Tina that intercourse is the most natural and pleasurable thing known to man-and woman!)

* Carla, 54, who declared after almost thirty years of marriage, “Every time my husband touches me, I feel used and abused!  I’ve told him many times that if he can’t leave me alone, I can’t stay married to him!” (And the shocking thing about this situation is that Carla is married to an ordained minister!  Not even an experienced spiritual leader with a PhD in theology has found the words to help her embrace God’s gift of sexual intimacy in marriage!)

* Pamela, 36, who insists, “My husband wants to look at me naked with the lights on, but I can’t stand the thought!” (Do women really think they can “starve” their husbands’ appetites for visual stimulation by hiding behind frumpy clothes and fuzzy pajamas?  Why can’t we just get comfortable baring all in the bedroom?)

* Brenda, 27, who says, “I always thought men wanted sex all the time, and that women typically rejected such advances.  It’s the other way around at my house, and I’m wondering how I cannot take his lack of sexual interest personally!”

(I know from dozens of e-mails I receive each week that Brenda is not alone with her sexual frustration and feelings of rejection.)

You may read these snippets and think it’s only women who are sexually confused and frustrated. Think again!  I frequently hear from men:

* Brandon, age 29, who complains, “I keep asking my wife what she wants in bed to become a more interested sex partner, but she has offered little in the way of guidance.  I want to be her ‘dream lover,’ but I can’t read her mind!” (Why does sexual communication have to be so awkward?  Why don’t we have the vocabulary skills to discuss our most common denominator-that we’re all sexual beings?)

* Kirk, 45, who says, “My wife has no idea that I go to bed absolutely burning with passion for her practically every night.  If I admitted that, she’d surely feel ‘put upon’ or that I am some sort of animal.  I settle for once a week out of fear that she might cut me off completely.”(How horrifying to imagine that some men feel as if they are “broken” or “dysfunctional” for simply wanting what God wired them to desire!)

Is this what God intended when He created sex?  That wives would feel fearful, abused, put upon, objectified, rejected?  That husbands would feel inadequate, frustrated, emasculated, animalistic?

No , it’s not.  It’s absolutely, positively not what He had in mind.

How do I know?

Because I know God.  Granted, He didn’t appear to me in the flesh and sit down over a cup of tea as I was crafting this.  But because He has given us His Word, we can certainly know His character and nature-which is to bless, not to burden…to protect, not to punish…to delight, not to discourage. And I believe His gift of sexuality is intended to bring us overwhelming pleasure, not intense pain…to fascinate, not to frustrate…to add and multiply good things into our lives and relationships, not subtract and divide.

Excerpted from  The Passion Principles: Celebrating Sexual Freedom in Marriage
by Shannon Ethridge. Copyright 2014. All Rights Reserved. Published by W Publishing Group, and imprint of Thomas Nelson, Nashville, TN. Used by Permission. Not to be copied without Publisher’s prior written approval.
Cart
Checkout - $0.00