Getting Over A Spouse’s Past- Part 2 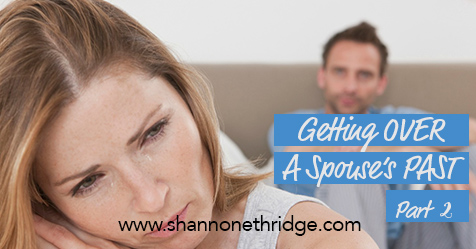 Want to know how to make that kind of healing choice?

Greg and I came into our marriage with a similar dynamic.  He walked into my world a twenty-six-year-old virgin. As for me, between the ages of fifteen and twenty, I’d had more partners than any woman cares to admit.  I’d forewarned Greg about “what kind of woman” he was interested in before we got engaged.  He seemed undaunted.  I approached him after two years of marriage crying, “There’s no way you could possibly love me if you knew how many men there have been!” yet he remained a rock of stability in my historically unstable world.
“I don’t need to know how many, Shannon.  But if you need to tell me, I’m willing to listen,” was Greg’s response. I spent a few days combing my memories and creating a long list. It was longer than I’d realized it would be. I braced myself for a look of disgust and a renunciation of his wedding vows.  As I vocalized the number, I literally choked on the sound of it emitting from my mouth, so broken with shame and self-loathing.
“Even if you told me a number one hundred times that, I’m still not going anywhere,” Greg firmly replied.  “Besides, I know that your past isn’t about you and me-it’s about you and your dad.”  Although I didn’t understand that at the time, Greg was absolutely right.  An emotionally distant father left such a gaping hole in my heart that, as a naïve teenager, I went looking for love to fill it. As a result, Greg wasn’t the first man I ever slept with. But as a result of Greg’s unconditional love, I do intend him to be the last.  And isn’t that what matters most? No matter how many sexual partners are in your spouse’s past, take comfort and pride in the fact that although you weren’t their first, you’ll certainly be their last. No one else can ever love them like you can.
Greg had never even once thrown that number, or my inappropriate past, up in my face.  I don’t doubt that it’s bothered him at times; I can’t imagine how it couldn’t.  But he’s never turned his concerns into ammunition against me, and his commitment to me hasn’t wavered or waffled.  We’ve each tried to focus on overcoming our own issues and insecurities, sharing our thoughts along the way to build rapport and bring healing, rather than getting angry at each other over situations that simply can’t be erased.  We’ve gradually witnessed God do what only God can do — bring deep healing in each of us.
So my advice to Don, and every other spouse on the planet whose marital partner has a colorful past, “Buck up and be the rock your spouse needs you to be!”  Don’t take your spouse’s sexual mistakes personally.  It was likely never about you.  Be “Jesus with skin on” to him or her.  Let your life and love paint a vivid picture of God’s unconditional love and mercy.  Teach each other that self-worth is not based on a sexual scorecard, but on who we are in Christ.
PRAYER:  Lord, teach me how to love my spouse in spite of their past, just as you love me in spite of mine.
Miss Part of The Series?
Part 1

Excerpted from  The Passion Principles: Celebrating Sexual Freedom in Marriage by Shannon Ethridge. Copyright 2014. All Rights Reserved. Published by W Publishing Group, and imprint of Thomas Nelson, Nashville, TN. Used by Permission. Not to be copied without Publisher’s prior written approval.
Cart
Checkout - $0.00