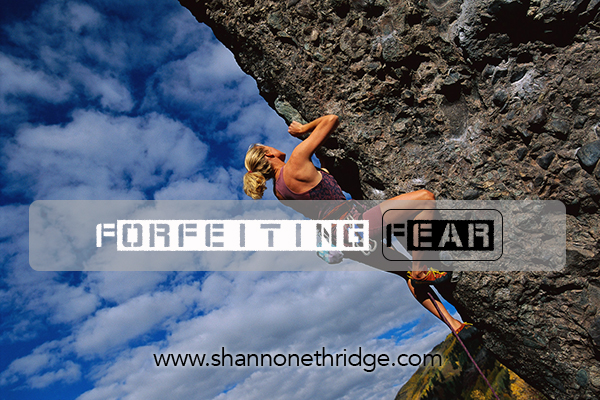 Have you ever counted how many references there are to fear in Scripture? Three hundred and sixty-five (one for every day of the year!). As many times as God proclaimed, “Fear not…” it is obvious that fear is a major hindrance to the Christian life.

Why is it such a hindrance? Because fear is the opposite of faith. When we focus on our fear rather than having faith in God to deliver us from evil, we are much more likely to lose the battle for sexual and emotional integrity. How can we focus on what we know God will do when we think we are doomed? Such lack of faith says to God, “Even though you’ve carried me this far, you are probably going to fail me now, aren’t you?” Overcoming our fear and exercising our faith says to God, just as David did in Psalm 9:9-10, “The LORD is a refuge for the oppressed, a stronghold in times of trouble. Those who know your name will trust in you, for you, LORD, have never forsaken those who seek you.”

I love taking youth groups to a high-ropes challenge course. There we gear up with helmets and safety pads and are connected to a guide wire in order to waltz across a twelve-foot balance beam suspended twenty-five feet in the air between two telephone poles. This exercise can bring out the lion in the most timid of creatures and the mouse in the boldest. I’ve seen dainty young girls saunter up the pole and tiptoe across gracefully without breaking a sweat. I’ve also seen two-hundred-pound linebackers turn white with fear and break out in tears midway through the course.

Before they climb the telephone poles, I always ask, “Would you have a problem walking across a wooden beam that was two inches off the ground?” When they say no, I remind them that walking across a beam twenty-five feet in the air is physically no different. The only difference is the mental challenge of overcoming the fear of heights. Success comes when we tune out the surroundings and focus on putting one foot in front of the other.

The same is true in our battle against sexual and emotional compromise. Many women are steeped in the fear of being alone, the fear of not being taken care of, the fear of not having another man on the hook in case the current one gets away. We can be so afraid of compromising tomorrow that we fail to take notice and celebrate the fact that we are standing firm today.

~ Helen says, “Bill is not someone I am really interested in because he’s too touchy-feely, but whenever a weekend comes around that I don’t have plans, I usually accept his dinner invitation because I just can’t face a whole weekend alone.”

~ Married eight years, Barb isn’t sure she and Jim are going to make it. They argue frequently and Barb is bitterly disappointed over Jim’s callous style of relating to her. “When I get really upset with him, I always know I can cry on Charlie’s shoulder.” (Charlie is Barb’s old boyfriend who always wanted to marry her.) “I have kept all of Charlie’s love letters and our old pictures together. I’m afraid to get rid of them. After all, he might someday be ‘the one’ if Jim and I don’t work out.”

~ Since her husband died two years ago, Beatrice worries about her financial situation. “I don’t feel that I am ready to invest in a new relationship and am not even sure I ever want to remarry,” Beatrice says. However, she thinks she may have to begin dating again because she may eventually need a husband to provide for her.

I used be overwhelmed at the thought of long-term, lasting fidelity. I often thought, Oh, there’s no way I can be faithful to one man for an entire lifetime! When a mentor asked me, “Can you be faithful for one day?” I scoffed at the ridiculousness of the request. “Of course I can. One day is no big deal! It’s the rest of my life that I’m worried about.”

“Life consists of one twenty-hour period after another. If you can be faithful for one day, you’ve got it made,” my mentor responded. “You just do the same thing the next day and the next day.”

The simplicity of her response floored me. Taking one day at a time and trusting our future to God is all it takes. That’s why Jesus taught us to pray, “Give us this day, our daily bread.” That is why God rained down bread from heaven each day when the Israelites were wandering in the desert without food — so that His people would learn daily dependence on Him. When we change our focus from the distant future to the immediate present, we gain the strength and courage to overcome the fear of what we may encounter down the road. Don’t focus on whether you can be faithful to one man for a lifetime — just focus on being faithful to him (or to God if you are single) just for today. Then do the same thing tomorrow, and the next day, and the next.