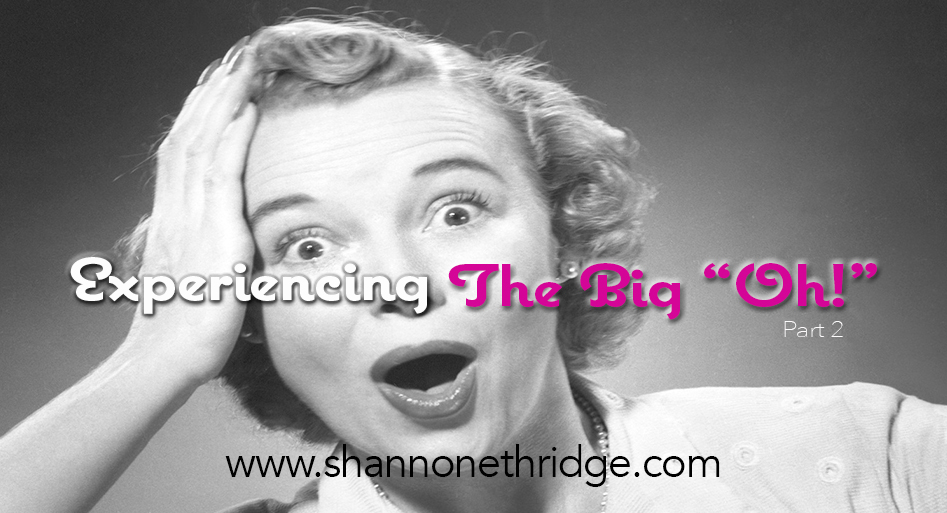 It’s worth mentioning that women simply take longer (sometimes ten times longer) to reach orgasm than men.  While he may only need two or three minutes, she usually needs twenty or thirty minutes.  Don’t feel bad about this, as if it’s so much harder on him to perform all that work that you’ll just settle for the three minutes that you are both getting something out of it.  That’s ultimately robbing you both, and you’ll eventually grow to feel resentful because sex seems to be too much about him, and not enough about you.  The fact is that most husbands don’t want to be perceived as selfish lovers.  Sure, he may get a good hand or tongue workout while stimulating you for half an hour or as long as it takes to help you orgasm, but most men really don’t mind.  After all, the payoff is pretty great — getting to watch his beautiful wife shudder with overwhelming pleasure and experience the big “O” because of how he makes her feel.

If you’ve never experienced some of these “Oh!” moments, please know that you are not alone.  Ten to 15 percent of American women have never experienced any kind of orgasm at all, and only 35 percent of the female population will orgasm during intercourse1.
One tidbit of good news, however, is that 90% of orgasmic problems are psychological in nature2.   In other words, most of the problem isn’t between our legs, but rather, between our ears.  The “stinking thinking” we often engage in translates into sexual insecurities, and those insecurities gravitate from our heads to our pelvises.  By allowing this to happen, we rob ourselves of that which is our birthright as females – euphoric sexual pleasure and fulfillment.
REFERENCE:
1) Robert W. Birth, Ph.D., Pathways to Pleasure, 2000.
2) Orgasmic Dysfunction, Medline Plus Medical Encyclopedia, September 2002.
Miss Part of The Series?
Part 1