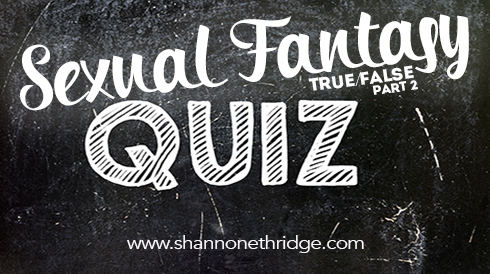 2.  The church does an adequate job of teaching Christians how to appropriately assess and discuss the topic of sexual fantasy.  False.

I don’t know about you, but I’ve never heard a single sermon on the roles, the rules, the benefits, or the boundaries of sexual fantasy.  Perhaps the reason is because the word fantasy doesn’t appear in the Bible at all, at least not in the several translations that I consulted.

The whole topic can be extremely difficult to discuss simply because of our lack of understanding.  For example, I recently heard from a gentleman who was quite unhappy with me for addressing the topic of sexual fantasy in my most recent book, The Sexually Confident Wife.  We exchanged several cordial emails back and forth before I finally thought to ask the question, “If I had used the term ‘sexual thoughts’ instead of ‘fantasies’ would you feel any differently about what I had to say on the topic?”

After a few hours of contemplation, he replied that indeed, we all have sexual thoughts, and that’s a perfectly appropriate thing to discuss.  So then I posed the question, “Can you explain to me your perceived difference between a sexual thought and a sexual fantasy?”  Through continued email exchanges, we considered together whether it is a matter of the content of the thought?  Or how it makes you feel in response?  Or how many seconds it stays in your head?  Perhaps less than 2 seconds flat and it’s merely a thought, but anything more than 2.1 seconds and it becomes a fantasy?

We both had to laugh at how difficult it is for Christians to even have a clear conversation when we don’t even have a clear vocabulary for the topic!  So let’s establish some definitions here before we go any further.

1. Imagination, especially when extravagant and unrestrained.

3. A mental image, especially when unreal or fantastic; vision

4. An imagined or conjured up sequence fulfilling a psychological need; daydream.

For the purposes of our discussion, I’m going to lean toward the fourth definition – that sexual fantasies are imaginative thoughts that fulfill some sort of psychological need.  I believe examining the fantasy for the purpose of discerning the underlying psychological need is absolutely key in helping us control those fantasies before they control us!