The Psychology and Theology of Sexual Thoughts- Part 2 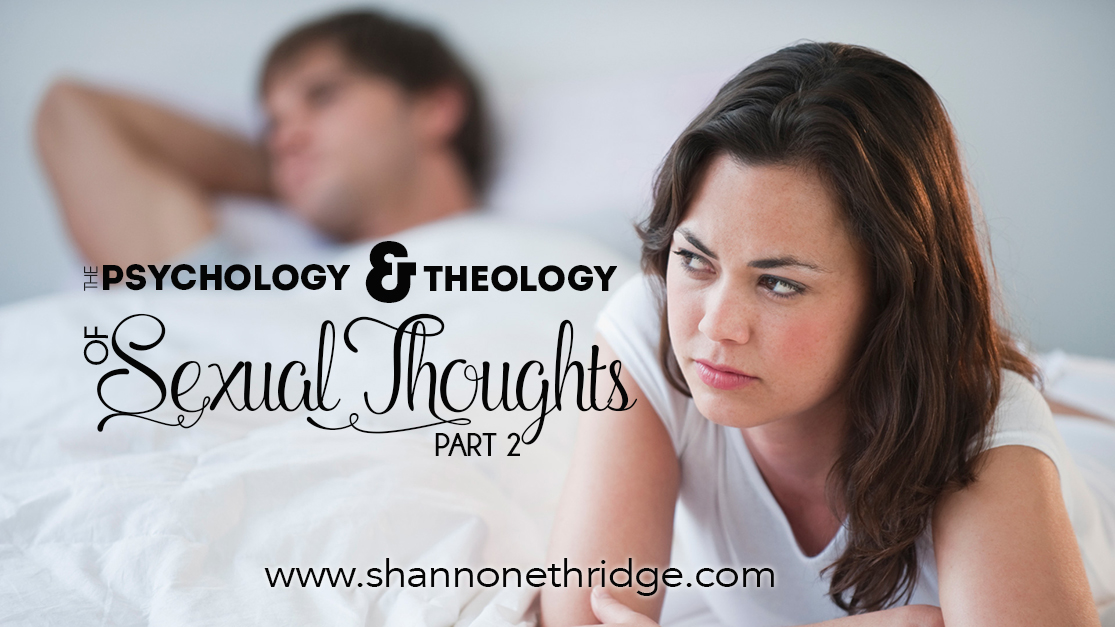 (Last time we focused on what psychology has to say about sexual fantasy,) so let’s shift to the other end of the spectrum and consider what the Bible has to say about our mental thoughts. These passages in particular come to mind:

You have heard that it was said, “You must not be guilty of adultery.” But I tell you that if anyone looks at a woman and wants to sin sexually with her, in his mind he has already done that sin with the woman. If your right eye causes you to sin, take it out and throw it away. It is better to lose one part of your body than to have your whole body thrown into hell. (Matt. 5:27-29, NCV)

At first glance, these passages can be even scarier than what psychology teaches! That we’re not going to heaven if we sin sexually? That we sin sexually simply by looking at someone lustfully? That we are to gouge our eye out if it causes us to lust? Gee whiz! No wonder many abandon Christianity because they feel as if they’ll never measure up to such unrealistic standards!

But let’s press the Pause button and investigate these scriptures a little further to fully understand the “bigger picture” of what Jesus and Paul were saying. Pastor Doug Clark of Community Christian Church in Tyler, Texas, recently preached a sermon on these two passages, and they helped me make more sense out of them than ever before.

Regarding the Matthew 5 text, Doug pointed out that Jesus was addressing the Pharisees’ notion that they were “holy enough” to get themselves into heaven. This was ridiculous, of course, because only Jesus fit that category. We need Him and the blood He shed for us on the cross to gain entry into heaven. So in order to dispel the myth in the Pharisees’ minds that their righteousness, particularly their own sexual purity, was enough to earn salvation, Jesus used the illustration of looking upon a woman lustfully, and told how they’d already committed adultery with her in their hearts and minds once they’d done so (Matt. 5:28). Jesus could have said, in other words, “Hey, guys! That little thing that you do so often . . . practically every day . . . without even noticing . . . thinking that it’s not hurting anyone or that it’s completely inconsequential-that little thing is enough to disqualify you! There’s no way you are holy enough to gain God’s approval. You need Me to get you into heaven!”

Of course, Jesus went on to explain that this “little thing” isn’t so little in His rule book. He said, “Gouge out your eye if it causes you to sin!” (Matt. 5:29) Are we to take Him literally? If we did, the entire church would be walking around blind yet still lusting in our hearts and minds because of the fallen state we live in! Physical blindness wouldn’t be sufficient to cure us of all our sexual depravity!

No, Jesus was using strong language to make His point: we are to take sin seriously! Taking lustful thoughts seriously is reason number #101 why I write the books that I do.