More Than We Can Imagine 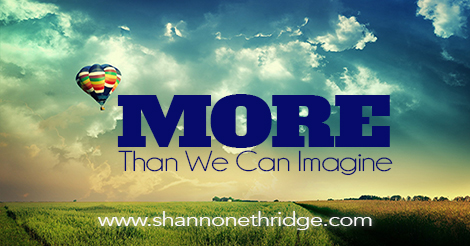 I walked downstairs to my office and laundry room one afternoon, noticing that someone had left the dryer door open with a load of towels still unfolded inside. Since I lean toward perfectionism, I couldn’t just sit down and concentrate on the work I needed to do knowing that a load of towels was sitting there. I slammed the dryer door shut, turned the cycle on to “high heat” for thirty minutes, and sat down to pay some bills.

Within seconds, I heard a thud coming from inside the dryer, then another thud, and so it continued in rhythm. I thought, Hmm. The kids must have tossed their wet sneakers in to dry. Thinking nothing of it, I pressed on until the buzzer went off half-an-hour later. Not wanting the towels to wrinkle, I opened the dryer door immediately, reached in, and pulled out not a sneaker, but Miss E., our family cat, dazed and delirious from having used up at least eight of her nine lives during that thirty-minute dryer ride. It took Miss E. several hours to regain her composure. She eventually had to have her tail amputated because of the nerves that were damaged. Fortunately, she survived the ordeal and the children forgave me for being so careless.
Things aren’t always what they seem. I had assumed that whatever was rumbling around in that dryer was probably just some worthless old sneakers, but it turned out to be something precious to every member of our family. Had I not reached inside to fold those towels immediately, Miss E. surely would have died from heat exhaustion. In order for her to remain alive, I had to reach in and grab hold of her.
God’s nature isn’t always what it seems either. Before… I saw God as a heavenly kill-joy… an angry disciplinarian… a disinterested, distant being who was exasperated by my failed attempts at getting my spiritual act together. Had I known that God’s nature is so merciful, so gracious, so patient, kind, and loving, I would have embraced a close relationship with Him much sooner than I did. I’m just thankful that God, in His goodness, has since given me such intimate and personal revelations about His true character.
Get a glimpse of God’s true nature, girlfriend. He can’t do wrong by you. Regardless of who or how many have left you, neglected you, or hurt you, you’ll never have to count God as one of those people. It’s not just that He won’t, it’s also that He can’t. His very nature makes it impossible. So rest assured: you can’t wear out your welcome. You can’t do anything good enough to make Him love you any more than He already does, nor can you do anything bad enough to make Him love you any less. God is unchangeable, forever committed to His love relationship with you. Only He is capable of loving you without any limits whatsoever, and only He is deserving of your limitless love in return.

Excerpted from Completely His: Loving Jesus Without Limits by Shannon Ethridge. Copyright 2007.  All Rights Reserved. Published by WaterBrook Press, Colorado Springs, CO 80921. Used by Permission. Not to be copied without Publisher’s prior written approval.
Cart Item Removed. Undo
Checkout - $0.00