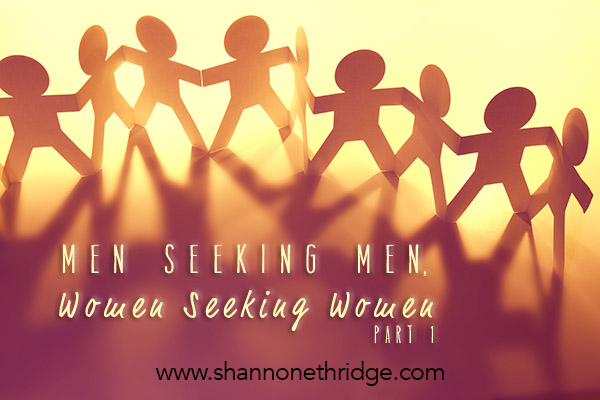 If I had a dime for every woman who told me she was confused and bewildered by her own lesbian fantasies, I’d be a very rich woman. This seems to be one of the most common struggles among Christian women today, especially with how glamorized lesbianism has become in our society. It has risen from gratuitous scenes in pornographic films to the mainstream media, with erotically positioned women appearing together on billboards, in magazines and movies, on television, and yes, all over the Internet.

With men, homosexuality is typically kept more on the “down low,” but one doesn’t have to look far to find a willing partner. In the words of one of my male friends, “Gay society welcomes you with such open arms. They make it so easy to fall down, and so hard to get back up!”

First, let’s look at a few possibilities that could be applicable to both men and women:

The “Rebel” Factor. As we emotionally separate from our families of origin, we often reject our parents’ spiritual and sexual values in an attempt to develop our own moral codes. If homosexuality was considered a big “taboo,” walking on that side of the street can satisfy one’s urge to be shockingly rebellious.

The “Ghost” Principle. Many men and women with same-sex fantasies have experienced a traumatic loss of a significant same-sex figure-either through death, divorce, or emotional disconnection. Therefore, the homosexual fantasy is the brain’s way of re-creating the male-male intimacy or the female-female intimacy that was lost in the mother/daughter or father/son relationship, or in the sister/sister or brother/brother relationship if the loss or disconnection was more with a sibling than with a parent.

The “Fix Me” Factor. When one grows up with a dysfunctional parental relationship, it’s easy to feel innately “broken.” The concept of having an older, wiser, same-sex partner who can “fix me” is the brain’s way of trying to right that wrong, and it can make fantasizing about that particular person sexually appealing.

The “Cannibal” Effect. Cannibals make meals out of people whom they admire and want to emulate. Similarly, humans are usually attracted to someone who possesses a strength or characteristic that they believe they need more of in their own lives. Sometimes this desire for the characteristic is mistaken as sexual desire for the person.

A few further possibilities that could explain a man’s pull toward other men are:

The “Aggression” Effect. Because the male hormone testosterone contributes not just to sex drive but also to anger and aggression in men, many take out their anger (often toward emotionally absent fathers) in sexual ways toward other men.

The “Punish Me” Principle. Because some men are subject to feel an enormous amount of guilt and shame about their homosexual desires, they will often subject themselves to the pain and humiliation of being seduced or even raped by other men. This also creates a psychological absolution of their guilt if they were merely the “victims” of such sexual activities.

The “No Strings” Factor. Men aren’t wired to be as “relational” as women, and because gay sex often takes place in casual, anonymous group settings (such as bathhouses where aggressive group sex is common), the gay community provides a way for men to be sexual without relational commitment.

Next time, we’ll examine a few valid reasons why the female mind would view another woman’s body as the object of her sexual fantasy.