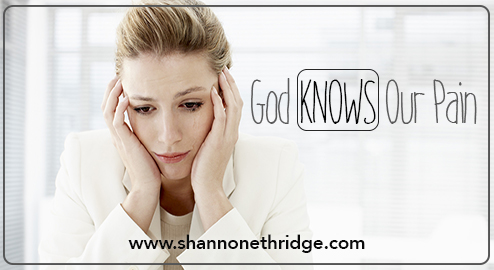 Rather than recognizing God as such an extravagant lover, many people see Him as a harsh, impossible-to-please, judgmental disciplinarian. I have a Jewish friend who, when I mentioned how fascinated I was with Jewish history and how they are God’s chosen people, she retorted, “Chosen? For what? Misery?”

Have the Jewish people suffered misery? Anyone who has read the Old Testament or walked through a Holocaust museum wouldn’t be foolish enough to try to deny this fact. But was God unfamiliar with their plight? Absolutely not. If anything, God is the only one who kept them from extinction, by their own deeds and by the evil deeds of others.
Indeed, no one’s plight in life has gone unnoticed by God. He alone is sympathetic to every suffering known to man. Consider the following piece of prose that vividly illustrates this truth:
Far out across the plain were hundreds of such groups. Each one had a complaint against God for the evil and suffering being permitted in this world. At the end of time, billions of people were scattered on a great plain before God’s throne. Some of the groups near the front talked heatedly, not cringing with shame but with belligerence.
“How can God judge us? How can He know about sufferings?” snapped a joking brunette. She jerked back a sleeve to reveal a tattooed number from a Nazi concentration camp. “We endured terror, beatings, torture, death.”
In another group, a black man lowered his collar. “What about this?” he demanded, showing an ugly rope burn. “Lynched for no crime but being black! We’ve suffocated in slave ships, been wrenched from loved ones, toiled till only death gave relief.”
How lucky God was to live in Heaven, where all was sweetness and light, where there was no weeping, no fear, no hunger, no hatred. Indeed, what did God know about what man had been forced to endure in this world? “After all, God leads a pretty sheltered life,” they said.
So each group sent out a leader, chosen because he had suffered the most. There was a Jew, a black, an untouchable from India, an illegitimate, a person from Hiroshima and one from a Siberian slave camp. In the center of the plain, they consulted with each other. At last, they were ready to present their case.
It was rather simple: Before God would be qualified to be their judge, He must endure what they had endured. Their decision was that God should be sentenced to live on earth as a man.
But because He was God, they set certain safeguards to be sure He could not use His divine powers to help Himself:
Let Him be born a Jew.
Let the legitimacy of His birth be doubted so that none will know who is really His father.
Let Him champion a cause so just but so radical that it brought down upon Him the hate, condemnation and eliminating efforts of every traditional and established religious authority.
Let Him try to describe what no man has ever seen, tasted, heard or smelled. Let Him try to communicate God to men.
Let him be betrayed by His dearest friends. Let him be indicted on false charges and tried before a prejudiced jury and convicted by a cowardly judge.
Let Him see what it is to be terribly alone, completely abandoned by every living thing. Let Him be tortured, and let Him die the most humiliating death with common thieves.
As each leader announced his portion of the sentence, loud murmurs of approval went up from the great throng of people.
When the last had finished pronouncing the sentence, there was a long silence. No one uttered another word. No one moved. For suddenly, all knew — God had already served His sentence.1