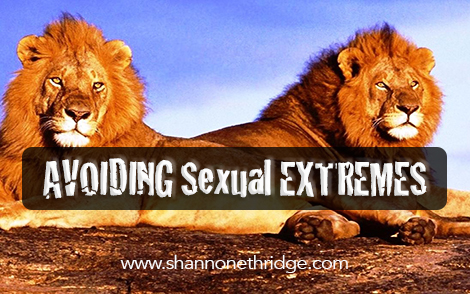 God [has called] my attention to an undeniable polarity in my life coaching practice. Some of my clients beat themselves up over the least little sexual thought, feeling as if surely they’d been unfaithful to their spouse and were a huge disappointment to God (neither of which are true). Others have occasionally killed their conscience and acted out on their sexual thoughts in ways that bring incredible pain and regret later, yet they continue to feel as if they are a slave to their sexual desires (which is also untrue).

When I [recognized] this polarity, I contemplated the position of two lions [that appeared in an incredibly vivid dream]-one to my left and one to my right. I realized that the lion on the right could represent extreme “right-wing” thinkers, or “legalists”-those who beat themselves (and others) up over the smallest sexual infraction. The lion on the left could represent extreme “left-wing” thinkers, or “liberals,”-those who turn a blind eye to their own inability to exercise sexual self-control.

I also gave careful consideration to how I’ve personally erred on both sides of this spectrum. There were seasons of my life, especially in my teens and early twenties, when I had an “anything goes” approach to sex. Well, not anything, but almost anything as long as it made me feel good and feel loved. (My definition of love at the time was obviously quite skewed.) There were also seasons after I’d gotten my head screwed on a little straighter that I probably thought I was a little higher up on the Christian totem pole than others because of the “pure” lifestyle I was living, being so faithful to my husband and preaching to others about sexual integrity and all. I shudder at how I unintentionally but oh-so-naturally judged people for their sexual brokenness, wondering, Why can’t you get your act together like I have? (Pretty dangerous thinking in light of how pride comes before a fall, huh?)

I realized that either of those extremes was very unhealthy. I was reminded of how we are warned to “avoid all extremes”:

In this meaningless life of mine I have seen both of these:

the righteous perishing in their righteousness,

and the wicked living long in their wickedness.

Do not be overrighteous,

Do not be overwicked,

and do not be a fool-

why die before your time?

It is good to grasp the one

and not let go of the other.

…in all things, including our sexual thoughts, we have to be careful to maintain a delicate balance between “legalism” and “liberalism.”

I’d never be legalistic enough to say that “all fantasy is evil.”…But I’d also never be liberal enough to say, “Open your mind to whatever the heck you want!”

Just as the girl in my dream was standing directly in the middle of two lions, not veering too far to the right nor to the left, we have to discover our healthy sexual balance.