Why is Song of Solomon in the Bible? – Part 1 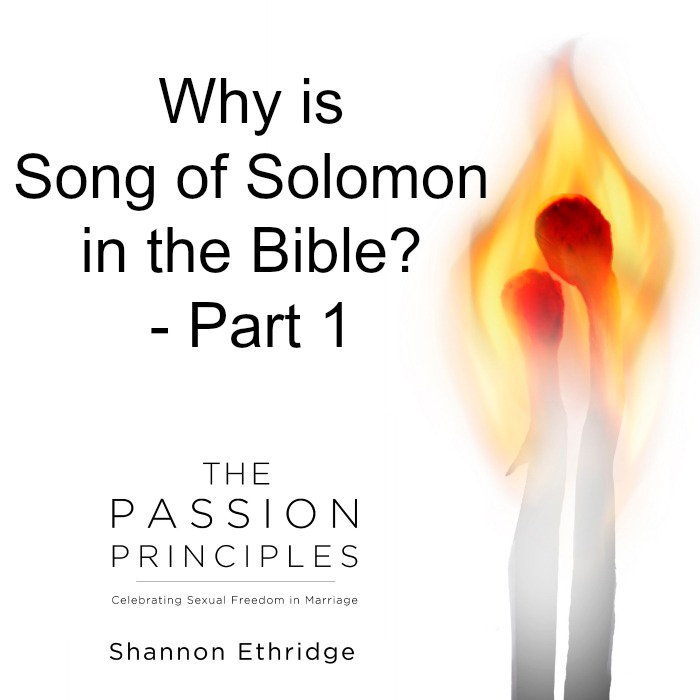 On a flight from Dallas to Los Angeles, I once found myself seated beside two middle-aged gentlemen who were obviously traveling together and who were each obviously involved in some sort of ministerial role.  They debated matters of church politics, doctrine, and Scripture, and of course my radar went up when the “Song of Solomon” came up as a topic of discussion.

The younger man in the window seat conjectured, “It’s obvious that the Song of Solomon is intended to be strictly a metaphor of God’s love for His people.”

The older man in the middle seat responded firmly, “It’s a good theory; I believe it’s more about human passion and earthly marriage.  After all, God is not even mentioned in the entire text.”

Out of my peripheral vision, I saw the younger man cock one eyebrow, give a humph! sound, and turn to stare out the window.  After gathering his thoughts, he replied, “Then why would the Song of Solomon even be included in the Bible at all?”

I sat in my aisle seat awaiting the answer with baited breath, resisting the temptation to turn to the “middle-man” and personally inquire, “Yeah, why is it in the Bible if it’s more about human passion than God’s passion?”

To gain a better understanding of why these writings are in the Bible at all, let’s consider what was going on in the culture at the time Song of Solomon was written.  Neighboring the Israelites (God’s chosen people) were the Canaanites, who worshipped their own god, Baal.  According to Canaanite beliefs, worshipping Baal guaranteed fertility and prosperity.  And a big part of their worship practices included cultic prostitution, where sex between a worshipper and a high priest supposedly guaranteed rain and bountiful crops.  If someone refused to participate in such sexual relationships, and crops failed due to drought or pestilence, the sexual stick-in-the-mud was blamed and faced great outrage from the rest of the Canaanites. As a result, there was a lot of pressure to use sex in some very ungodly ways.

So I believe the writer of Song of Solomon wanted to remind the Israelites of the sanctity of sex within marriage.  How?  By simply painting a stunningly beautiful portrait of the passion in an exclusive love relationship-not one based on cultic prostitution, but one based on commitment, as we see these two lovers so smitten with one another that no one else could possibly turn their heads.  It’s a celebration of physical and emotional attraction, of overwhelming passion, of all-consuming desire, of verbal affirmation, of sexual expression.

But what has that got to do with God?

It has everything to do with God, because God is the Author of all such things.

Excerpted from  The Passion Principles: Celebrating Sexual Freedom in Marriage  by Shannon Ethridge. Copyright 2013.  All Rights Reserved. Published by W Publishing Group, and imprint of Thomas Nelson, Nashville, TN. Used by Permission. Not to be copied without Publisher’s prior written approval.
Cart
Checkout - $0.00