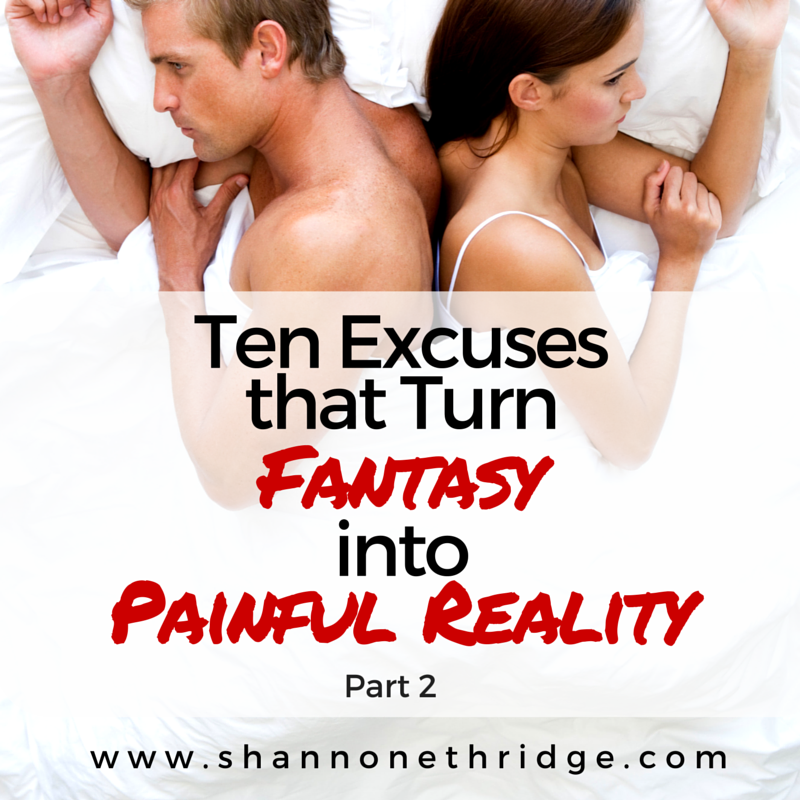 When a coaching client describes a person as “no one they’d ever be attracted to,” I can see the end of the story coming a mile away. They’re suddenly bewildered to find that they were wrong. By letting their guard down around this not-so-desirable person, they’ve come to desire them intensely. Just because you don’t feel an attraction to someone immediately doesn’t mean that an attraction couldn’t develop over time and a few cups of coffee, so be wise and steer as clear as necessary to keep even future temptation at bay!

7. If loving you is wrong, I don’t wanna be right!

Some try to turn a fantasy into a reality simply to even the score. No doubt that the sting of a spouse’s betrayal is sharp, but two wrongs do not make a right. Remember that hurting people hurt people. Focus on helping your spouse recognize the hurts that led them to be unfaithful in the first place, rather than grabbing a “free pass” and diving into the deep waters of dysfunction along with them.

What’s one more? That’s how dieters fall off the weight-loss bandwagon, how smokers stay hooked on cigarettes, and how alcoholics remain enslaved to a shot glass. It’s also how sex, love, and relationship addicts remain entrenched in emotional entanglements. If this describes you, adopt a new motto: The last time was the last time!

10. I can always repent later.

Let’s face it. Love is a many splendored thing, but can also be a very splintered thing, especially outside the boundaries of a marriage relationship. It gets under the surface of our skin, wreaks all kinds of havoc, and is incredibly hard to eradicate. Repenting of an inappropriate relationship sooner rather than later minimizes your chances of infection, so don’t put off until tomorrow what you should have done yesterday!

Missed part of the series? Read it here!