Myths That Intensify Our Struggle- Part 6 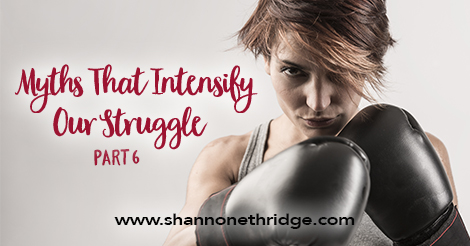 MYTH 5
Because I feel so sexually tempted, I must already be guilty, so why bother resisting?
Satan’s favorite strategy to use to convince women to cross the line between temptation and sin is false guilt. If sexual integrity is a battle you are entrenched in, you’ve probably had some of these thoughts rolling around in your head until you can no longer think straight:
~  “You can’t deny that you want him! You may as well go after him!”
~  “You know you’ll never be able to be faithful to one man forever!”
~  “You’ve already gone this far, what’s one step further?”
~  “You’ve thought about this moment for months! Don’t back out now!”
~  “If you want to keep him, you are going to have to give him what he wants!”
These lies are temptations from the enemy, not evidence that you are already guilty! I call this false guilt because temptation, in and of itself, is not sin. There’s nothing to feel guilty about when you are tempted. If you don’t believe me, maybe you will believe the writer of Hebrews when he says:
For we do not have a high priest who is unable to sympathize with our weaknesses, but we have one who has been tempted in every way, just as we are-yet was without sin. Let us then approach the throne of grace with confidence, so that we may receive mercy and find grace to help us in our time of need. (Hebrews 4:15-16)
Did you get that? Jesus himself was tempted in every way! “Even sexually?” you say. Why not sexually? He was a man in every sense of the word. He had beautiful women following Him around and taking care of His needs with their own money. He was reaching out to minister to women who would have loved to have Jesus hold them in His arms. The writer didn’t say, “He was tempted in every way except sexually.” He was human in every way and experienced every human temptation. He set the example for us that just because we are tempted does not mean that we must give in and become a slave to our passions.
But women often make the mistake of believing that because they are so attracted to someone, they will inevitably fall into a relationship with that person, regardless of how inappropriate that relationship may be. As you will see in chapter 6, women can draw a line between attraction and acting out on that attraction. It is normal to feel attracted to multiple people. It is not normal to attach yourself to multiple people. Remember that love is not a feeling, but a commitment. You’ve not broken your commitment to your husband if you feel tempted to seek satisfaction outside your marriage, but only when you’ve allowed yourself to stray there and stay there mentally, emotionally, or physically.