The #1 Reason Why Women Avoid Sex 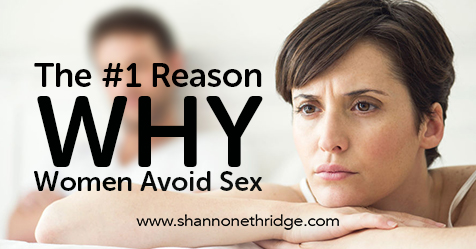 The interesting thing about body image is that no matter how good we might look, we always think we should look better.  Perhaps that’s because 75% of female sitcom characters we look at from week to week on television are underweight, not to mention the airbrushed anorexic magazine models we have to stare at every time we go to buy a jug of milk (skim or 1%, of course).  It’s a rather unfair comparison when you consider that the average American woman is 5’4″ and weighs 140 pounds, yet the average American model is 5’11” and weighs 117 pounds. 1

But many of those models and celebrities, some of the sexiest, most enviable women of our day, often feel as if they have a long way to go before they are good enough.  Although she’s been voted the sexiest, most beautiful woman alive by many publications, Scarlett Johansson was quoted as saying, “Everyone in Hollywood is so damn skinny.  You constantly feel like you’re not skinny enough…2  Print and runway model Kate Dillon had to take time off from her career to work on her body because she was told she was too large to be a model (even though she was already underweight).  Allie McBeal’s Calista Flockhart finally admitted after years of denial that she had an eating disorder, abusing her body by over-exercising and under-eating.3  When women like Scarlett Johansson, Kate Dillon and Calista Flockhart aren’t good enough in their own eyes, it’s easy to wonder how the heck we are supposed to feel about our own fuller-figure selves.  In fact, most women aren’t satisfied with themselves at all.  According to the National Eating Disorders Association…

* Approximately 45% of women are dieting on any given day (the rest are probably just taking a day off).

* 80% of women report that they are unhappy with their appearance (and when Mama ain’t happy, ain’t nobody happy).4

And how does this dissatisfaction with our weight and low self-esteem affect our sexual confidence?  USA Today reports that the #1 reason women avoid sex is… (drum roll, please)… because they felt uncomfortable with how their body looked.5   No!  Really?  Okay, maybe you’re not so shocked by that newsflash.  Neither was I.  Most of us have been there, done that, got the t-shirt, and the video.  And the t-shirt was too small, which fueled our belief that we are simply too fat.